The UW Steelband, directed by Dr. Shannon Dudley, was founded by Trinidadian steel pan musician and arranger Ray Holman, who served as Visiting Artist in Ethnomusicology at the University of Washington from 1998-2000.

The ensemble performs arrangements of calypso, salsa, reggae and other styles, and plays for a variety of community events as well as a couple of concerts on campus each year.  The focus in learning is on rhythm and ensemble playing.

Students of all backgrounds are welcome to enroll in the introductory class, Musen 110.  The performing ensemble, Musen 410, is for those with more experience and interest.

END_OF_DOCUMENT_TOKEN_TO_BE_REPLACED 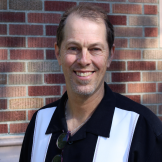 It’s a instrument unlike any you’ve ever seen or heard. Tracing its origins to early 20th century Trinidad, the steel pan is constructed by hammering notes into the sunken bottom of an oil drum and played using small, rubber-tipped mallets. But the instrument’s outward simplicity belies complex origins.