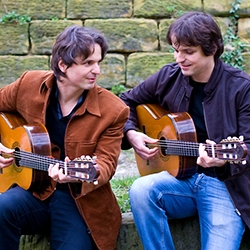 Critically acclaimed by the Daily Telegraph as “the classical world’s best known guitar duo,” Peter and Zoltán Katona effortlessly transfer from strictly classical, into more popular musical genres. They have given recitals in the major concert venues throughout the world including performances at Carnegie Hall, Wigmore Hall, the Concertgebouw in Amsterdam, the Konzerthaus in Vienna, the Tchaikovsky Concert Hall in Moscow, the Suntory Hall in Tokyo, and the Philharmonie in Berlin. In 2009, as the soloists of the "Night of the Proms" they performed live to half a million people in arenas across Europe. They played together with renowned musicians such as Yo-Yo Ma and Kathryn Stott and world class ensembles such as the BBC Concert Orchestra and the London Sinfonietta.

The Katona Twins have won numerous prizes, both individually and together. In 1993 they won first prize at the most prestigious duo-guitar competition in Montelimar, France. In the same year Peter and Zoltán won first prize at the international duo-guitar competition held in Bubenreuth, Germany and were awarded the Cultural Prize of the City of Kassel, Germany.  In 1997 they were winners at the Young Concert Artist Trust competition in London and in the same year they successfully auditioned for the Park Lane contemporary music group. Earlier in their careers the twins won the S.T. Johnson Foundation prize in 1995 and The Laura Ashley prize in 1996.

In 1998 they won the Concert Artists Guild Competition held in New York, followed by a tour of the United States including their Carnegie Hall debut. In 2004, they were awarded the prestigious Borletti-Buitoni prize, the first guitarists in the trust's history. They were Resident Artists of San Francisco Performances from 2007 - 2011.

The wide repertoire of the duo spans from Bach and Mozart to Piazzolla’s tango music to their arrangements of pop classics. Their programs also include concertos for two guitars and orchestra by Rodrigo, Vivaldi, Piazzolla and Tedesco. Several composers have written and dedicated their works to the Katona Twins.

The Katona Twins have been invited on numerous occasions to record for the BBC and other international television and radio stations. Their CD releases include music by Scarlatti and Handel; Rodrigo; Albéniz, Piazzolla and Manuel de Falla.

The Katona Twins studied both individually and as a guitar duo in Budapest, Frankfurt and at the Royal Academy of Music in London. During their studies their teachers included Julian Bream and John Williams. Peter and Zoltán Katona were born in Hungary; they are German citizens and live in Liverpool, England.