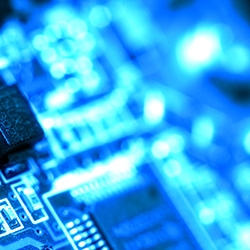 DXARTS: An Evening of Electro-Acoustic Music

The Center for Digital Arts and Experimental Media (DXARTS) presents a concert of electro-acoustic music from throughout the history of the genre.

This concert features early works by early 20th century avant-garde artist Walter Ruttmann and musique concrète pioneer Pierre Schaeffer alongside contemporary compositions by Matthew Barnard and Pete Stollery. Innovative examples from newly appointed DXARTS staff member Joseph Anderson and the Director of the School of Music, Richard Karpen, complete the program. Presented by the Center for Digital Arts and Experimental Media (DXARTS) and the University of Washington, Seattle, this concert will be performed over DXARTS' 3D sound diffusion system.

Walter Ruttman
Walter Ruttmann was born in 1887 in Frankfurt and died in 1941 in Berlin. He studied architecture and painting and worked as a graphic designer. His film career began in the early 1920s. His first abstract short films, "Opus I" (1921) and "Opus II" (1923) were experiments with new forms of film expression.

Ruttmann and his colleagues of the avant garde movement enriched the language of film as a medium with new form techniques. Together with Erwin Piscator, he worked on the experimental film "Melodie der Welt" (1929).


Richard Karpen
Richard Karpen is a composer and researcher in multiple areas music and the arts. His compositions for both electronic media and live performance are widely known, recorded, and performed internationally. Over the last 30 years he has also been one of the leading pioneers in the development of computer applications for music composition, interactive performance, and sonic arts. He has recently returned to the stage as a pianist.

Pete Stollery
Pete Stollery studied composition with Jonty Harrison at the University of Birmingham, where he was one of the first members of BEAST (Birmingham ElectroAcoustic Sound Theatre) in the early ’80s. He now composes almost exclusively in the electroacoustic medium, particularly acousmatic music.

He has collaborated with practitioners from other artistic disciplines, particularly dance and sculpture and has produced music and sound design for a number of UK visitor attractions including Dynamic Earth in Edinburgh, Magna in Rotherham and St Patrick’s World in Downpatrick (Northern Ireland).

He is Professor of Composition and Electroacoustic Music and Director of the Electroacoustic Music Studio at the University of Aberdeen (Scotland), delivering courses on the creative applications of technology in music and music education to students, schoolchildren and the general public.

He was a board member of Sonic Arts Network (SAN), the national organization promoting electroacoustic music in the UK, which he chaired in 1996-99 and again in 2002-03. In 1996, along with Alistair MacDonald, Robert Dow and Simon Atkinson, he established invisiblEARts (www.invisiblearts.org.uk) whose aim is to perform acousmatic music throughout Scotland and to promote Scottish acousmatic music to a wider audience, both within Scotland and abroad.

Pierre Schaeffer
The father of musique concrète, French composer Pierre Schaeffer was among the most visionary artists of the postwar era; through the creation of abstract sound mosaics divorced from conventional musical theory, he pioneered a sonic revolution which continues to resonate across the contemporary cultural landscape, most deeply in the grooves of hip-hop and electronica.

Born in 1910, Schaeffer was not a trained musician or composer, but was instead working as a radio engineer when he founded the RTF electronic studio in 1944 to begin his first experiments in what would ultimately be dubbed "musique concrète." Working with found fragments of sound -- both musical and environmental in origin -- he assembled his first tape-machine pieces, collages of noise manipulated through changes in pitch, duration and amplitude; the end result heralded a radical new interpretation of musical form and perception.

In October 1948, Schaeffer broadcast his first public piece, Etude aux Chemins de Fer, over French radio airwaves; although the public reaction ranged from comic disbelief to genuine outrage, many composers and performers were intrigued, among them Pierre Henry, who in 1949 joined the RTF staff, as well as future collaborators Luc Ferrari and Iannis Xenakis. (Olivier Messiaen was also a guest, bringing with him students Karlheinz Stockhausen and Pierre Boulez.) Schaeffer forged on, in 1948 completing Etude Pathetique, which in its frenetic mix of sampled voices anticipated the emergence of hip-hop scratching techniques by over a generation; by 1949's Suite pour 14 Instruments, he had turned to neo-classical textures, distorted virtually beyond recognition. In 1950, Schaeffer and Henry collaborated on Symphonie pour un homme seul, a 12-movement work employing the sounds of the human body.

Working with the classically-trained Henry on subsequent pieces including Variations Sur une Flute Mexicaine and Orphee 51 clearly informed Schaeffer's later projects, as he soon adopted a more accessible musical approach. Together, the two men also co-founded the Groupe de Musique Concrète in 1951; later rechristened the Groupe de Recherches Musicales, or GRM, their studio became the launching pad behind some of the most crucial electronic music compositions of the era, among them Edgard Varèse's Deserts. However, by the end of the decade most of the GRM's members grew increasingly disenchanted with the painstaking efforts required to construct pieces from vinyl records and magnetic tape; after later, tightly-constructed works like 1958's Etude aux Sons Animes and the next year's Etudes aux Objets, even Schaeffer himself announced his retirement from music in 1960.

Leaving the GRM in the hands of Francois Bayle, some months later Schaeffer founded the research center of the Office of French Television Broadcasting, serving as its director from 1960 to 1975; in 1967, he also published an essay titled "Musique Concrète: What Do I Know?" which largely dismissed the principles behind his groundbreaking work, concluding that what music now needed was "searchers," not "auteurs." In later years, Schaeffer did explore areas of psycho-acoustic research which he dubbed Traite de Objets Musicaux (TOM); these experiments yielded one final piece, the 11-minute Le Triedre Fertile. He also hit the lecture circuit and agreed to produce radio presentations. Pierre Schaeffer died in Aix-en-Provence on August 19, 1995.

Matthew Barnard
Based in the UK, Matthew Barnard is a composer and researcher investigating the compositional avenues of the binaural method of recording and reproduction. He completed a PhD in Composition at the University of Hull, Scarborough Campus under the supervision of Dr Joseph Anderson.

Joseph Anderson
Joseph Anderson is a composer with a particular interest in the development of a spatio-musical practice of sound composition and performance. This work is focused on acousmatic music created through self-authored tools and signal processing algorithms. He is the lead author of the Ambisonic Toolkit which brings many of these advanced spatial techniques to a wider audience of artists and composers.

As a former member of the Birmingham ElectroAcoustic Sound Theatre (BEAST) Anderson set up the San Francisco Tape Music Collective (SFTMC) with Matt Ingalls to bring the practice of sound diffusion to public performances in the San Francisco Bay Area. And, through the SFTMC Anderson continues to programme and perform on the The San Francisco Tape Music Festival. Recognitions for his compositional efforts have included the “Grand Prix” from the 1997 Bourges Electroacoustic Music Competition for Change’s Music.