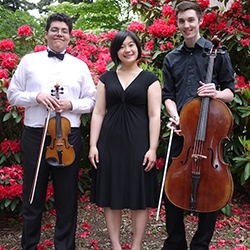 ARTIST BIOS
Trio Andromeda
Trio Andromeda was formed in the spring of 2013 by violinist Allion Salvador, cellist Alec Duggan and pianist Li-Cheng Hung, and currently serves as the official student piano trio of University of Washington. The TA won the 4th Annual Strings and Piano Chamber Competition at the UW of School of Music, and was awarded the Helen A. Reynolds Endowed scholarship in music. Andromeda is coached by Melia Watras, chair of the strings program at UW, and has also worked with Dr. Robin McCabe, Professor Ronald Patterson, violist David Harding and Phil Setzer, violinist of Emerson String Quartet. In November 2013, the trio won the Washington Music Teachers National Association (MTNA) Competition, and they will compete in the regional round in Portland in January 2014.

Allion Salvador, violin
Allion Salvador is currently in his fourth year pursuing a double degree program in Neurobiology and Violin Performance at the University of Washington, studying with Ronald Patterson. He has served as concertmaster of the Florida Youth Orchestra Symphony, Florida All-County Orchestra and University of Washington Symphony, among others, and has performed with numerous orchestras and chamber ensembles including the Florida All-State, Ars Flores, Frost School of Music, Seattle Collaborative and Seattle Rock Orchestras. Allion was also named a winner of the UW Annual Concerto Competition and the UW Chamber Music Competition, as a member of Trio Andromeda, for 2013-14.

Alec Duggan, cello
Alec Duggan is a senior at the University of Washington, pursuing degrees in Mathematics and Music. He studied with the late Toby Saks and is currently studying with Eric Gaenslen. He has played with numerous local ensembles and orchestras, including the Seattle Collaborative Orchestra, Seattle Metropolitan Chamber Orchestra, and the Seattle Rock Orchestra. He is also an active officer of the Chamber Music Club at UW, a group that promotes the enjoyment of playing chamber music for music majors and non-music majors. He currently performs with Trio Andromeda, recent MTNA state winner, which is coached by Melia Watras.

Li-Cheng Hung, piano
Li-Cheng Hung is in her third year at the University of Washington School of Music, working toward a Doctor of Musical Arts degree in piano performance under the tutelage of Dr. Robin McCabe. Li-Cheng was the winner of UW concerto competition and performed with UW orchestra. In September 2013, she was invited to perform with Burmese Orchestra at National Concert Hall, Taiwan. Li-Cheng also received numerous awards, including a scholarship from the American Taiwanese Charity and Education Association and an invitation to perform in Washington D.C. Li-Cheng currently plays with Trio Andromeda, which serves as the official scholarship chamber group at UW.