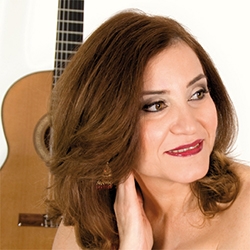 Renowned for her flawless technique and innate musicality, Berta Rojas ranks among the world's foremost classical guitarists. Her warmth and heart touching musical artistry delight audiences wherever she performs. She has been praised as "Guitarist Extraordinaire" by the Washington Post, and by Classical Guitar magazine as an "Ambassador of the classical guitar."

Berta Rojas is a master guitarist who displays outstanding technical and musical virtuosity. As a performer, Rojas ranks among the top players of the day as she is both technically proficient and emotionally expressive on every note.

On the concert stage, Berta moves easily between classical and other musical genres as her audiences are treated to an evening full of warmth, sensitivity and magic. She continues to captivate audiences and critics from Carnegie Hall to the South Bank Centre in London, selling out performances at venues around the world including the Frederick Rose Hall at the Lincoln Center, the John F. Kennedy Center, the National Concert Hall in Ireland with the Irish Radio and Television Orchestra, and as soloist with the Brussels Philharmonic Orchestra for National Belgian Television. She opened the Summit of the First Ladies of the Americas, attended by then First Lady, Hillary Rodham Clinton.

Berta Rojas' virtuosity proves to be among the most expressive and idiomatic guitar music in the guitar's repertoire. A truly magical performer, her programs contain some of the most beautiful and exciting pieces ever written for solo guitar, as she uses every aspect of the instrument. Her tremolo is as smooth as glass, and the often remarkably challenging technical components of the music are disguised by her formidable technique, making them seem non-existent. She performs this music as if she has always known it, with the deepest understanding and passion as her expert musicianship shines through.

Berta maintains a busy schedule of performing, teaching and recording. Her "Intimate Barrios" is one of the most celebrated recordings of the great Paraguayan Maestro. With the great acclaim of her CDs "Cielo Abierto" and "Terruño", Berta has continued bringing a fresh and exciting new repertoire to the guitar. She has also toured in duo with the renowned Maestro Carlos Barbosa-Lima, a collaboration culminating in the CD "Alma y Corazón."

In addition to continuously enriching her own musicianship and her tireless touring, Berta Rojas is committed to furthering the growth of classical guitar in the Americas, with particular focus on supporting young performers.

In the summer of 2009 she created the first online classical guitar competition, the Barrios WorldWideWeb Competition, which generated tremendous interest throughout the guitar world.

She is artistic director of the Ibero-American Guitar Festival held at the Smithsonian Institution Museum of the American Indian in Washington DC..

Berta Rojas is Professor of Guitar at George Washington University in Washington DC.. She studied with Abel Carlevaro and received a Bachelor of Music degree at the Escuela Universitaria de Musica in Uruguay where she was a student of Eduardo Fernandez. Later, she earned a Master’s Degree in Music from Baltimore’s Peabody Conservatory where she studied under Manuel Barrueco.