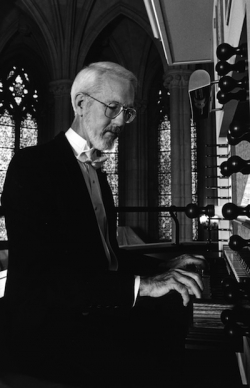 Robert Parkins is the University Organist and a Professor of the Practice of Music at Duke University. He has performed throughout the United States, in Europe, and in Central America, and his playing has been described as “artistic, technically flawless, and imaginative” (The American Organist).

For a number of years, he has specialized in early Iberian keyboard music, and more recently he has focused his attention on the German Romantic organ and its literature. His publications include articles for a number of professional journals as well as the chapter on “Spain and Portugal” in Keyboard Music Before 1700 (Routledge 2004).

Dr. Parkins received his degrees from the University of Cincinnati College-Conservatory of Music and the Yale University School of Music. In 1973 he was awarded a Fulbright grant to study in Vienna. His teachers have included Gerre Hancock, Anton Heiller, Ralph Kirkpatrick, Charles Krigbaum, and Michael Schneider.