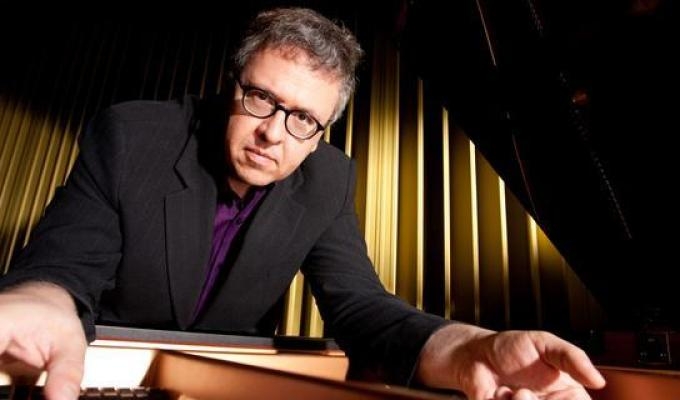 Corey Hamm of the University of British Columbia.

Concert pianist Corey Hamm, assistant professor of piano and chamber music at the University of British Columbia, presents a program of contemporary classical works for piano.

ARTIST BIO
Corey Hamm, piano
Dr. Corey Hamm is both an internationally performing pianist and Assistant Professor of Piano and Chamber Music at The University of British Columbia (UBC) in Vancouver, Canada. He is Director of the UBC Contemporary Players and joined the faculty of UBC in Fall 2005. Dr. Hamm is honoured to be nominated for and winner of the 2008/2009 UBC Killam Teaching Award for Excellence in Teaching.

Dr. Hamm is also on the Piano Faculty of the fantastic Summer Institute for Contemporary Performance Practice (SICPP, or Sick Puppy!) at the New England Conservatory in Boston. He has also been a Co-Director of the also-fantastic Young Artists Experience (YEA) in Vancouver.

Hamm's performances as soloist and chamber musician have been broadcast on CBC Radio, NPR and Polish Radio in Canada, the USA, and Europe. He has performed as concerto soloist with the Vancouver Symphony, Lethbridge Symphony, Edmonton Symphony Orchestra, CTV Orchestra, and The Symphonic Wind Ensembles of the University of Bitish Columbia, and the University of Minnesota.

Hamm is pianist with the prominent new music ensemble The Nu:BC Collective. With Nu:BC ("a delightfully diverse evening of sights and sounds" - Georgia Straight) he has performed multimedia concerts of works by Gyorgy Ligeti (danced and choreographed by Emily Molnar "a dazzling performance of five excerpts from Gyorgy Ligeti's lengthy Etudes for piano" - Georgia Straight); Howard Bashaw ("Hamm was easily the most impressive member of a well-rehearsed and disciplined band" - Georgia Straight); George Crumb ("navigated the subaqueous atmospheres of George Crumb's Vox Balaenae with ease" - Georgia Straight); Gyorgy Kurtag, John Adams, Michel Gonneville, Chris Paul Harman, Nikolai Kapustin, Steve Mackey, Bright Sheng, Frederic Rzewski, Chen Yi, Dorothy Chang, Lee Hoiby, and many others. The Nu:BC Collective is proud to have been a part of Vancouver Pro Musica’s Sonic Boom new music festival for the last four years, premiering dozens of works by Vancouver composers. In 2010 the Nu:BC Collective will also be involved in an exciting collaboration with the BC Chinese Music Ensemble involving new works for both Chinese and Western instruments.

Hamm is also a founding member of the Canadian two-piano, two-percussion ensemble Hammerhead Consort, formed in 1990, and winners of such important Canadian awards as the Sir Ernest Macmillan Memorial Foundation Chamber Music Award (1992), and the CIBC National Music Competition (1991), as well as the 1993 ARIA Award for Best Classical Recording. Their second CD, Traffic, was released on Arktos Recordings in 1999. Hammerhead Consort performed in a live broadcast from the prestigious Witold Lutoslawski Studio in Warsaw while on tour in Poland in June 2000 (under the auspices of both The Canada Council and Polish Radio), and garnered rave reviews at the 2000 Winnipeg New Music Festival. With Hammerhead, Hamm has given over forty performances of Bartok's masterpiece, Sonata for Two Pianos and Percussion, plus performances of works by Rzewski, Kapustin, Helweg, and Carl Orff's Carmina Burana, as well as over forty works written for the Consort by such noted Canadian composers as Malcolm Forsyth, James Harley, Howard Bashaw, David R. Scott, Sean Ferguson, among others. CBC Radio recorded Hammerhead in premieres of works by Hamel, Helweg and Godin at the opening concert of New Music Concerts 2004-2005 season in Toronto. The Consort premiered Howard Bashaw's Concerto for Two Pianos and Two Percussion with the Edmonton Symphony Orchestra in March 2000.