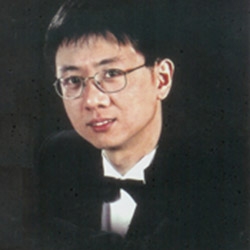 Guan Changxin of the China Conservatory.

Guan Changxin of the China Conservatory of Music leads a master class with UW piano students.

As one of the laureates of the 1992 National Piano Competition of China under the instruction of Prof. Yang Jun, Guan Chang-xin was invited to give performances representing China in the 1993 Tokyo International Young Artist Festival. His success led to a nation-wide concert tour, including appearances with orchestra and multi-disciplinary collaborations.

Born into a musical family in Guangzhou , Guan Chang-xin began studying piano, ear training, and music theory from his mother. His early teachers also included Chen Hua-yi, Zhao Bi-shan, Wu Zheng-wen, Pan Xing-hua, and Ying Shi-zhen. Mr. Guan studied at the Guangzhou Xing-hai Conservatory of Music, and later was selected to study in Beijing at the Central Conservatory of Music where he earned his bachelor's and master's degrees of Art in piano performance under the instruction of Prof. Li Hui-li and Prof. Yang Jun.

Moving to the United States for further study, Mr. Guan entered the Music School of Texas Christian University with scholarship and served as Departmental Artistic Assistant. He studied with Dr. Tamás Ungár, a renowned professor and the Executive Director of PianoTexas International Academy & Festival where Mr. Guan served as Staff Accompanist of the Concerto Competition. After winning the 8th Martin Memorial Piano Competition, Mr. Guan earned another master's degree in piano performance.

Not only is Mr. Guan a gifted soloist, he is also an enthusiastic chamber musician. As an experienced instructor, Mr. Guan has been invited to teach and perform at different music institutions and give master classes and lectures both in China and the U.S. Mr. Guan is currently a piano lecturer and Foreign Exchange Coordinator at the China Conservatory of Music in Beijing