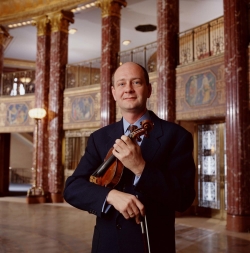 William Preucil leads a series of masterclasses at UW this spring.

Concertmaster of the Cleveland Symphony, world-renowned violinist and educator Bill Preucil shares his talent and insight with young musicians from the UW and Seattle music communities in three master classes hosted by School of Music violin professor Ron Patterson.

William Preucil became concertmaster of The Cleveland Orchestra in April 1995 and has appeared regularly as a soloist with the Orchestra in concerto performances at both Severance Hall and the annual Blossom Festival.

Prior to joining The Cleveland Orchestra, Mr. Preucil served for seven seasons as first violinist of the Grammy-winning Cleveland Quartet, performing more than 100 concerts each year in the world’s major music capitals. Telarc International recorded the Cleveland Quartet performing the complete cycle of Beethoven’s 17 string quartets, as well as a variety of chamber works by Haydn, Mozart, Schubert, and Brahms.

Mr. Preucil regularly performs chamber music, as a guest soloist with other orchestras, and at summer music festivals. His North American festival performances have included Santa Fe, Sarasota, Seattle, and Sitka, with international appearances in France, Germany, and Switzerland. Each summer, he serves as concertmaster and violin soloist with the Mainly Mozart Festival Orchestra in San Diego. Mr. Preucil also continues to perform as a member of the Lanier Trio, whose recording of the complete Dvořák piano trios was honored as one of Timemagazine’s top 10 compact discs for 1993. The Lanier Trio also has recorded the trios of Mendelssohn and Paulus for Gasparo Records.

Actively involved as an educator, Mr. Preucil serves as Distinguished Professor of Violin at the Cleveland Institute of Music and at Furman University. He previously taught at the Eastman School of Music and at the University of Georgia.

William Preucil began studying violin at the age of five with his mother, Doris Preucil, a pioneer in Suzuki violin instruction in the United States. At 16, he graduated with honors from the Interlochen Arts Academy and entered Indiana University to study with Josef Gingold (former concertmaster of The Cleveland Orchestra). He was awarded a performer’s certificate at Indiana University and also studied with Zino Francescatti and György Sebök.