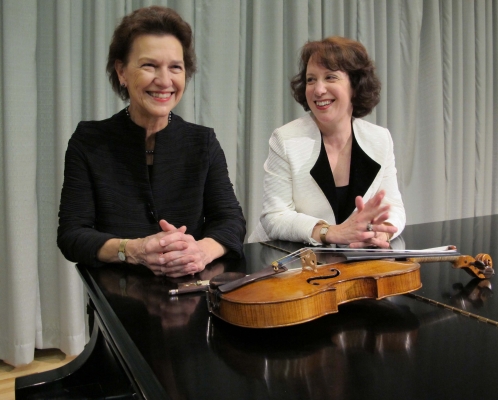 Former Seattle Symphony concertmaster Maria Larionoff has appeared as a soloist with the Los Angeles Philharmonic, the Seattle, Yakima and Port Angeles symphonies, the Orquesta Sinfónica Carlos Chávez, and the University of Washington and San Francisco chamber orchestras.

Also versatile as a violist, she has collaborated in many chamber music festivals.

In May 2002, with her husband, University of Washington double bassist Barry Lieberman, she launched the immensely successful American String Project, a conductorless string orchestra comprised of concertmasters, professors and distinguished soloists from around the world.

She plays on a 1775 Guadagnini (the ex- Lorand) on loan from the family of Dr. Benum W. Fox of Chicago.

Stephen Rumph teaches courses on Mozart, Beethoven, Fauré, Bach, Verdi, Wagner, music and politics, opera, rhetoric, and semiotics. He earned his Ph.D. at the University of California, Berkeley, writing a Beethoven dissertation with Joseph Kerman. He joined the UW School of Music faculty in 2002.

Rumph's book Beethoven After Napoleon: Political Romanticism in the Late Works (University of California Press, 2004) offers a political interpretation of late Beethoven illuminated by the writings of the German Romantics. A new book, Mozart and Enlightenment Semiotics, is in production with UC Press. It pioneers a "historically-informed" semiotics of music for Mozart, based upon eighteenth-century sign and language theory. His next project will be a study of Gabriel Fauré's melodies.

Rumph has published articles in the Journal of the Royal Music Association, Music and Letters, Beethoven Forum, 19th-Century Music, Eighteenth-Century Music, and The Journal of Musicology, as wells as reviews in JAMS, JRMA, Beethoven Forum, the Cambridge Opera Journal, and Journal of Musicological Research. He has given invited papers at Oxford, Cambridge, Stanford, Duke, University of British Columbia, University of Nottingham, and various conferences and music festivals. He served as Reviews Editor for Beethoven Forum (2005-2008).