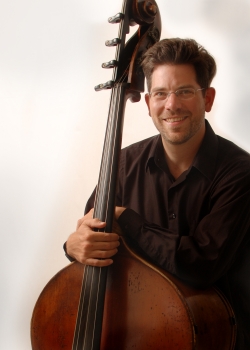 Principal bass of the Tacoma Symphony performs works by Luciano Berio, Johannes Sperger, and G. Bottsini as well as "Angel of Dusk,” by the Finnish composer Einojuhani Rautaavara, a complex work with two pianos and percussion accompaniment considered by many to be one of the leading double bass concerto of the 20th and 21st centuries.

Originally from South Florida, Chris Burns has been principal bassist of the Tacoma Symphony Orchestra since 2009.  As a concerto soloist with the TSO, his playing was praised by the Tacoma News Tribune as “effortlessly clear and lyrical with calm virtuosity and thoughtful expression.” Chris recently premiered “The Pirate Musician” by Duane Hulbert for solo double bass with narration, and has been featured as a soloist in Tacoma’s Second City Chamber series, in collaboration with the Carpe Diem String Quartet. Chris is an active freelance musician in the Northwest, performing with the Seattle Symphony, Seattle Opera, and Northwest Sinfonietta, as well as on numerous film scores. Prior to moving to the Northwest, Chris was solo bassist for the Houston Bach Society and Opera in the Heights, as well as a substitute bassist with the Houston Grand Opera. Chris received his Bachelors of Music from the New England Conservatory in Boston, and was a Fulbright Scholar at the Universität für Musik in Vienna, Austria.  While in Vienna, he was principal bass of the Wiener Jeunese Orchester and the Sinfonietta Baden. Chris has performed with the Jacksonville, Charleston, and San Antonio Symphony Orchestras, and has participated in national and international festivals, including Spoleto USA, Victoria Bach Festival, AIMS in Graz, Austria, and the Festival de Musica Barroca de San Miquel de Allende in Mexico. Chris enjoys playing a wide range of styles from early music to contemporary, and had the honor of premiering “Sharaffudin” for solo double bass by the late microtonal composer, Joe Maneri. In addition to his performing career, Chris is also a dedicated string educator, and is the orchestra teacher at Narrows View Intermediate School in University Place School District.

Philadelphia Orchestra,) Joel Quarrington (Principal bass, Toronto Symphony), and many other prominent double bassists from around the world.

Mr. Lieberman has conducted several master classes at the Guildhall School of Music in London, England, the equivalent of the Juilliard School in America and he was featured in the world’s most important magazine for double bass, The Double Bassist (Winter, 2005.)