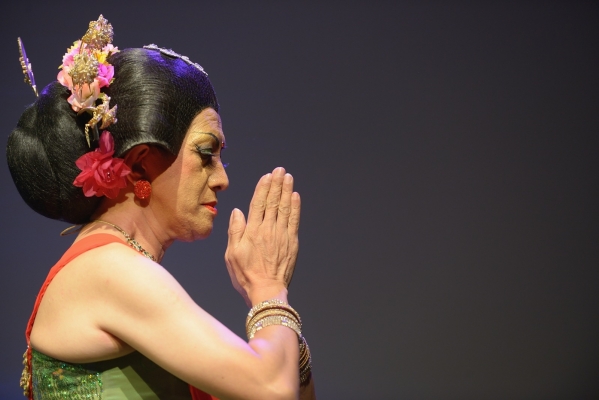 Didik Nini Thowok, a master dancer from Java, Indonesia, is known throughout Indonesia for his unique style combining classical, folk, modern, and comedic dance forms. One of the few artists to continue the long Indonesian tradition of “Traditional Cross Gender“ in the dance form, Didik is renowned for his talent in impersonating female characters and for his skill in various dance traditions such as topeng (mask dance), Sundanese, Cirebon, Balinese, and of course Central Javanese. In this free event, Didik Nini Thowok and School of Music faculty member Christina Sunardi perform cross-gender dances and discuss Didik’s work as an artist.

He’s come along the way to enrich himself by working and teaching in order to become a multi talented and professional artist, particularly in dancing.
Lots of awards have been granted to Didik Nini Thowok throughout his works and his unique style in combining classical, folk, modern and comedic dance.
Some of his original choreographies are very well known in Indonesia. Aside from performing his own original choreographies, he also has the incredible skill in performing various dance traditions such as Topeng(mask), Sundanese, Cirebon, Balinese, and of course Central Javanese.

Didik Nini Thowok’s fame propelled him throughout Indonesia for his unique style; combining classical, folk, modern and comedic dance form. He is one of the few artist who continues the long tradition of “ Traditional Cross Gender “ in the dance form. His talent in impersonating female characters as well as his incredible skill in various dance traditions such as topeng (mask dance), Sundanese, Cirebon, Balinese, and of course Central Javanese; has on many occasions dumfounded the audience in determining the gender of the artist. Didik Nini Thowok has performed for the highest dignitaries throughout the world. Didik Nini Thowok Dance Studio teaches many styles of dances, including Central Javanese, Sundanese, Cirebon Mask Dance, Balinese and Original Choreography.

The name Didik Nini Thowok is identically well known with humorous dances movement pattern. Apparently, in Didik Nini Thowok’s concept and idea, dances have become a vehicle to entertain and to cheer up the heart and soul of the public. On the stage, he transforms into a coquettish and cheerful dancer, but lots of people accused him commercial in return. That’s the result of his struggle over 20 years to find his own dance characteristics creation. It is said that to dance not as the way people dance generally. His dance creations shown in public always reflect the cheerful spirit and are being presented in some fresh styles and formats. Most of them were inspired by the traditional dances that came from various sub ethnics that lie within the Indonesian archipelago.

Christina Sunardi is an assistant professor in the Ethnomusicology program in the School of Music at the University of Washington, where she has been teaching since 2008. Her interests include performance, identity, spirituality and ethnography in Indonesia. Her work focuses in particular on the articulation of gender through music, dance, and theater in the cultural region of east Java.

Her publications include articles in Bijdragen Tot de Taal-, Land en Volkenkunde, Asian Music, andEthnomusicology, as well as reviews in the Journal of Folklore Research Reviews, American Journal of Islamic Social Sciences, and Indonesia.  Dr. Sunardi has been studying and performing Javanese arts since 1997 in Indonesia and the United States, earning her Ph.D. in music from the University of California, Berkeley in 2007. She is currently working on a book about the negotiation of gender and tradition through dance and music in east Java.  In addition to her academic work, she enjoys playing gamelan music with the Seattle-based ensemble Gamelan Pacifica and performing as an independent dancer.