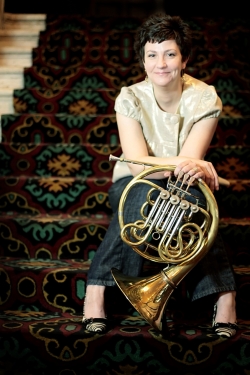 Denise Tryon joined The Philadelphia Orchestra in 2009 as fourth horn. Previously the fourth horn of the Detroit Symphony, she has also held positions with the Baltimore, Columbus, and New World symphonies and has participated in the Colorado Music Festival and the Pacific Music Festival.

Ms. Tryon graduated high school from the famed Interlochen Arts Academy and received her Bachelor of Music degree, with distinction in performance, from the New England Conservatory of Music in Boston. As a member of the Taiyo Wind Quintet, she had the privilege of working with John Harbison, Luciano Berio, György Ligeti, and Elliott Carter.

An active and accomplished educator, Ms. Tryon started Audition Mode, a yearly horn seminar, with Karl Pituch. She was a contributing artist at the International Horn Society Symposium in San Francisco in 2011, as well as being one of the Solo Artists at the Nordic Hornfest in Norway in 2012. She was on the horn faculty at BIBA (Blekinge International Brass Academy) in Sweden, as well as one of the solo artists at the Warsaw Horn Workshops in 2013. Sought after for master classes, Ms. Tryon has taught extensively in the United States, Scandinavia, and Europe. Currently she is on the faculty of the Peabody Conservatory in Baltimore.