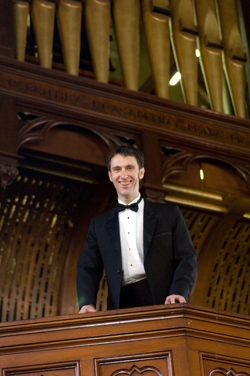 University Organist at Brown University, Mark Steinbach also serves as organist and choirmaster of historic St. Paul’s Church in Wickford, Rhode Island. The organist presents a recital at Seattle’s St. Mark’s Cathedral on Feb. 20 and a master class with UW organ students at the UW’s Walker-Ames Room on Feb. 21.  Dr. Steinbach’s appearances are co-sponsored by the School of Music and St. Mark’s Cathedral.

Mark Steinbach is University Organist, Instrument Curator, and Lecturer in Music at Brown University. He also serves as organist and choirmaster of historic St. Paul's Church in Wickford, Rhode Island. Mr. Steinbach earned the Bachelor of Music Degree from the University of Kansas, and the Master of Music and Doctor of Musical Arts Degrees from The Eastman School of Music. As a Fulbright Scholar he studied at the Hochschule für Musik in Vienna. Mr. Steinbach has performed in Boston, New York, Washington, D.C., San Francisco, Austria, Germany, and Italy. He performed the world premiere of Daniel Pinkham's Odes at the New England Regional Convention of The American Guild of Organists. He has also performed solo recitals for the National Convention of The Organ Historical Society, the International Organ Festival at the Oude Kerk in Amsterdam, and the Bolzano and the Storici Organi della Valsesia Festivals in Italy. He was featured on National Public Radio's "All Things Considered," performing on the oldest organ in use in a church in the United States (1640s, Wickford, RI). Mr. Steinbach may be heard on the CD "Pipes RI." A forthcoming solo CD recording will feature works of Anton Heiller on Loft Recordings.