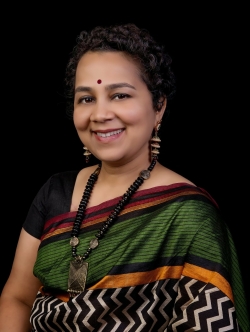 Winter Quarter Ethnomusicology Visiting Artist Srivani Jade is joined by her students for this presentation of Hindustani khyal, a form of Indian classical music.

Srivani comes from an intensely musical family, and was introduced to music at the age of four by her father Bhavani Prasad Jade and uncle Raghavendra Tilwalli. Srivani has performed regularly on stage, radio and television in India from the age of five. She now concertizes regularly both in India and North America, has several solo albums to her credit, and has received grants and awards for original work in Indian music. She is also on the performance roster of 4Culture (Seattle) and All India Radio (Dharwad).

She started her Khayal training with Dr. Sharad Gadre in the Gwalior style (2002-03). Since 2006, she has been studying the Kirana style with Pandit Parameshwar Hegde of Bangalore, India. In addition, Srivani has acquired an eclectic collection of Thumri, Dadra, Kajri, Chaiti, Hori, Jhoola, Tappa and Bhajans from various sources, including archival recordings. She enjoys the folk verse, emotive capacity and versatile treatment of raagas in these genres.

In 2009, Srivani was one of three artists to receive a Fellowship Award from Washington State Arts Commission (WSAC). These awards recognize outstanding traditional artists for their contributions to their culture and community. She has received the WSAC Folk Arts Master-Apprentice grants twice (2008-9, 2009-10) to pass on the tradition of Khayal and Thumri to a few select local artists. She received an Artist Support Program (recording) grant from Jack Straw Productions (2009) for her project on the spiritual love songs of the 16th century mystic, Meera Bai. The resulting album, "Meera's Love", won a nomination at the10th Annual IMA award in the World Music category. The world premiere of "Astitva", a story of two powerful women in Indian history--Meera Bai and Jhansi Lakshmi Bai--told through Khayal music and Odissi dance received an NEA grant(2012). Her project "Raag-rang: a musical interpretation of modern Indian style miniature paintings" has received an Individual Artist Project grant from 4Culture(2012).

Srivani is a passionate teacher, and continues to offer workshops in schools, colleges and universities, on the subject of performance, composition and improvisation in Indian music, in addition to master lessons. She was Visiting Artist with the UW Music School's Ethnomusicology program (Winter quarter, 2013), Artist in Residence at Jack Straw Productions (2008-9) and University of Washington Bothell's Interdisciplinary Arts program (2009). Srivani was founding editor of Ragavani Journal of South Asian Music and Dance (2007-08). She has served on the board of Kirkland Performance Center (2010-12), a vibrant international art house, and helped curate the Namaste Kirkland annual performance series.

Srivani has a Master's degree in Electrical Engineering from Colorado State University.