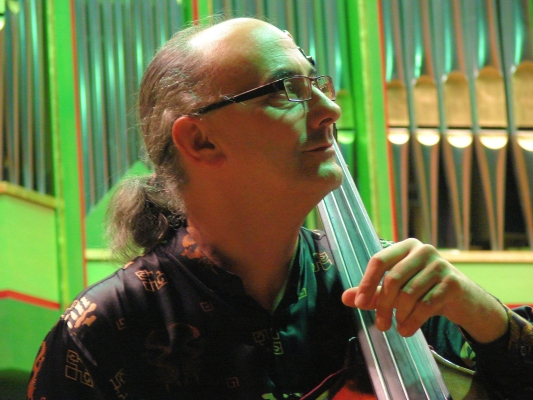 Cesar Franck:  Sonata for violin in A major

Mr. Rotaru collaborates frequently with the Phoenix Symphony Orchestra and Arizona Opera and performs extensively as soloist in recitals or with symphony orchestras throughout the United States and abroad, giving numerous clinics and master classes. He received the second prize at the 1997 International Society of Bassists Solo Division Competition and the Jury's Special Award for the best performance of the required piece at that competition. He was the winner of the Krannert Center for the Performing Arts Debut Recital Award in 1997, and received the Central Illinois Chapter of the National Society of Arts and Letters Award in 1996. Mr. Rotaru recently completed recording his debut solo CD, entitled Bass*ic Cello Notes released by Summit Records. For the last several years, Professor Rotaru has been a frequent solo performer at the “Virtuosi” International Chamber Music Festival of Pernambuco in Brazil. Mr. Rotaru performs on a double bass made in Italy by Luciano Golia and a bow made by Marco Pasquino.

Barry Lieberman is now in his twentieth year as double bass faculty at the University of Washington, Seattle, Washington. He began his career at age twenty-one as principal bass of the Winnipeg Symphony.  In 1976 Zubin Mehta appointed him Associate Principal bass of the Los Angeles Philharmonic, a post he held for seventeen years.

Mr. Lieberman has been a regular performer with Chamber Music Northwest, Music from Angel Fire, the International Festival in Seattle, Bravo Colorado, Bargemusic, the Seattle Chamber Music Festival, Mostly Mozart, and served as Principal bass of the Colorado Music Festival in Boulder, Colorado. Most recently Mr. Lieberman performed with the Orpheus Chamber Orchestra, both in New York City and on tour in Europe. He has also performed with, and toured the Far East, Europe and the U.S. with the Mostly Mozart chamber orchestra.

A former member of the New European Strings for several years, Mr. Lieberman has toured both the US and Europe with it’s leader, Dimirtri Sitkovetsky. Mr. Lieberman has also served as Principal Bass of the Seattle Symphony on many occasions.

In l994, Mr. Lieberman created the series, “Barry Lieberman and Friends”, at the University of Washington.  A series that combines the talents of members of the Seattle Symphony (most notably his wife, Maria Larionoff, former Concertmaster of the SSO), the University, guest artists, and most importantly, students from both the University as well as preparatory level.  The series has met with great success and critical acclaim. Featured artists on this series have included Gary Karr, Thomas Martin (Principal bass, London Symphony,) Hal Robinson (Principal bass, Philadelphia Orchestra,) Joel Quarrington (Principal bass, Toronto Symphony), and many other prominent double bassists from around the world.

Mr. Lieberman has conducted several master classes at the Guildhall School of Music in London, England, the equivalent of the Juiliard School in America and he was featured in the world’s most important magazine for double bass, The Double Bassist (Winter, 2005.)

In the summer of 2004, Mr. Lieberman was invited to join the faculty at the Roundtop Music Festival in Roundtop, Texas, one of the country’s most respected summer music programs.

In 2009 Mr. Lieberman was invited to join the Philharmonia Orchestra and Esa Pekka Salonen as Principal Bass for a European tour of Great Britain, Scandinavia and Europe.

Mr. Lieberman is a graduate of the Interlochen Arts Academy and the Cleveland Institute of Music.  He and his wife Maria Larionoff, the former Concertmaster of the Seattle Symphony, live with their Golden Retriever Mia and their Ibizan Hound “Crabcake” in a house remodeled and decorated by Mr. Lieberman in perfect mid-century modern style.