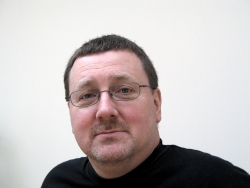 Composer Jonty Harrison is featured on the April 9 Music of Today performance.

The Center for DIgital Arts and Experimental Music and UW Music co-present this appearance by British composer Jonty Harrison, regarded as one of the most important figures of the style now known as "British Acousmatics." As the founding director of BEAST(Birmingham ElectroAcoustic Sound Theatre), Harrison has popularized electronic music "sound diffusion" over an orchestra of loudspeakers, where the space of the concert hall is treated as an instrument of musical expression.

Jonty Harrison studied with Bernard Rands at the University of York, graduating with a DPhil in Composition in 1980. Between 1976 and 1980 he lived in London, working at the National Theatre (where he produced the tape components for many productions, includingTamburlaine the Great, Julius Caesar, Brand and Amadeus) and City University. In 1980 he joined the Music Department of The University of Birmingham, where he is now Professor of Composition and Electroacoustic Music, as well as Director of the Electroacoustic Music Studios and BEAST (Birmingham ElectroAcoustic Sound Theatre).

At The University of Birmingham he has taught a number of postgraduate composers from the UK and overseas, many of whom are now themselves leading figures in the composition and teaching of electroacoustic music in many parts of the world. For ten years he was Artistic Director of the department’s annual Barber Festival of Contemporary Music and he has made conducting appearances with the Birmingham Contemporary Music Group (most notably conductingStockhausen’s Momente in Birmingham, Huddersfield and London), the University New Music Ensemble and the University Orchestra (most recently in Stravinsky’s Le sacre du printemps and Vic Hoyland’s Vixen). He was a Board member of Sonic Arts Network (SAN) for many years (and Chair in 1993-96). He has also been on the Council and Executive Committee of the Society for the Promotion of New Music and was a member of the Music Advisory Panel of The Arts Council of Great Britain.

As a composer he has received several Prizes and Mentions in the Bourges International Electroacoustic Music Awards (including a Euphonie d’or for Klang in 1992 cited as “one of the most significant works” in the Bourges competition’s history), two Distinctions and two Mentions in the Prix Ars Electronica (Linz, Austria), First Prize in the Musica Nova competition (Prague), a Lloyds Bank National Composers’ Award, a PRS Prize for Electroacoustic Composition, an Arts Council Composition Bursary and research grants from the Leverhulme Trust and from the Arts and Humanities Research Board/Council.

He has undertaken a number of composition residencies, most recently in Basel (Switzerland), Ohain (Belgium) and Bangor (Wales, UK), and has been guest composer at numerous international festivals. His music is performed and broadcast worldwide. Several works are available on empreintes DIGITALes, SAN/NMC, Cultures électroniques/Mnémosyne Musique Média, CDCM/Centaur, Asphodel, Clarinet Classics, and EMF.