UW Symphony and Seattle Symphony: Side by Side 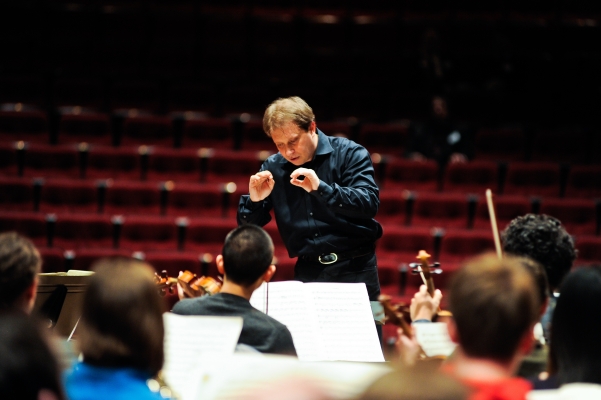 Ludovic Morlot and David Alexander Rahbee share conducting duties in this program of performances by the UW Symphony and members of the Seattle Symphony, performing both separately and side-by-side. Works by Beethoven, Stravinsky, Debussy, and Dukas showcase the talents of each group prior to a side-by-side performance of Ravel’s “Mother Goose” Suite.

Note: Limited seating is available. A wait list will be started one hour prior to show at the Meany Box Office

*Note: Admission to the concert is free, but tickets are required. To reserve tickets, click the "Buy TIckets" link on this page to order.  Limit two tickets per request. Tickets may also be requested in person at the ArtsUW Ticket Offce, 1313 NE 41st St., Seattle WA 98105 or by phone at 206.543.4880.

David Alexander Rahbee is artist-in-residence at the University of Washington School of Music in Seattle, where he is conductor of the University Orchestra and teaches conducting. He was a recipient of the American-Austrian Foundation's 2003 Herbert von Karajan Fellowship for Young Conductors, the 2005 International Richard-Wagner-Verband Stipend, and received a fellowship from the Acanthes Centre in Paris in 2007.

French conductor Ludovic Morlot is Music Director of the Seattle Symphony. His many highlights of his first three seasons included an exhilarating performance at Carnegie Hall in May 2014, of which The New York Times wrote, “The performance Mr. Morlot coaxed from his players was rich with shimmering colours and tremulous energy.” During the 2014–2015 season Ludovic and the Seattle Symphony will continue to invite their audiences to “Listen Boldly,” presenting a wide variety of works, ranging from Dvořák’s final three symphonies, the Mozart Requiem, Berlioz’s Roméo et Juliette and Mahler’s Symphony No. 3, to pieces by Ives, Dutilleux and Esa-Pekka Salonen, to world premieres by Sebastian Currier, Julian Anderson and Trimpin. Complemented by the innovative Symphony Untuxed and [untitled] series, this season also sees the release of several more recordings, conducted by Morlot, on the orchestra’s new label, Seattle Symphony Media.

Morlot is also Chief Conductor of La Monnaie, one of Europe’s most prestigious opera houses. This season sees him conduct the world-premiere performance of Pascal Dusapin’s Penthesileaand a new production of Don Giovanni, concert performances of music by Brahms, Dutilleux and Dvořák, and Berlioz’s L'enfance du Christ and a complete symphony cycle by Schumann. Last season he conducted new productions of La clemenza di Tito and Jenůfa and orchestral performances in both Brussels and Aix-en-Provence.

Morlot’s orchestral engagements this season include returns to the Los Angeles Philharmonic and Chicago Symphony Orchestra. He has a particularly close relationship with the latter, with which he will conduct two subscription weeks, including the world-premiere performance of Anne Clyne’s Violin Concerto. He also has a strong connection with the Boston Symphony Orchestra, which he conducts regularly in Boston and Tanglewood, and recently on a West Coast tour. This relationship began in 2001 when he was the Seiji Ozawa Fellowship Conductor at the Tanglewood Music Center and was subsequently appointed Assistant Conductor for the orchestra and their Music Director James Levine (2004–07).

Trained as a violinist, Morlot studied conducting at the Royal Academy of Music in London and then at the Royal College of Music as recipient of the Norman del Mar Conducting Fellowship. He was elected a fellow of the Royal Academy of Music in 2007 in recognition of his significant contribution to music. He is Chair of Orchestral Conducting Studies at the University of Washington School of Music, and lives in Seattle with his wife, Ghizlane, and their two children.