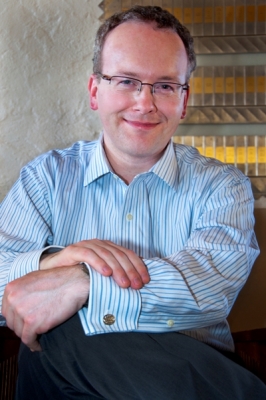 Born in Cardiff, Wales, Dr. Iain Quinn enjoys a distinguished career as an organist, musicologist, andcomposer. With an extensive repertoire, he has won critical praise for his performances of both standard and contemporary works, in addition to his research and performance of rare and unpublished repertoire. His compositions are heard in churches and concert halls around the world.

He began his musical training as a chorister at Llandaff Cathedral. After initial studies of the piano and trumpet at the Welsh College of Music and Drama he concentrated on the organ, studying with Robert Court and Nicolas Kynaston. At 14 he was appointed Organist at St. Michael’s Theological College, Llandaff, and was the youngest person ever to hold the post. He later joined the faculty of the Blackheath Conservatoire, London.

In 1994 he moved to the USA to pursue advanced study at The Juilliard School, New York and later The Hartt School, University of Hartford (Bachelor of Music summa cum laude), and the Institute of Sacred Music, Yale University (Master in Music). His principal teachers were John Weaver, Larry Allen, Thomas Murray, William Porter (improvisation) and Nathan Williamson (composition). In 2009 he returned to the UK as a Doctoral Fellow at the University of Durham and completed his PhD (Historical Musicology) in 2012. In the Spring of 2012 he was a Visiting Fellow at Harvard University. He also holds the diplomas of Fellow of the Royal College of Organists and Fellow of the Royal Schools of Music (with distinction).

He has served parishes in New York, Connecticut and New Mexico. From 2005–2010 he was Director of Cathedral Music at the Cathedral Church of St. John, Albuquerque, New Mexico where in addition to his liturgical responsibilities he also directed an annual series of concerts of major works for choir and orchestra and established Cathedral Commissions, which sponsored a series of choral works for the Cathedral Choir.

As a composer he has written works for choir and organ which have been performed around the world with commissions from numerous churches, choirs, and the American Guild of Organists. His organ works have been performed at Notre Dame, and St. Sulpice, Paris, the first Annual Festival of New Organ Music, London, and the Festival of Contemporary Church Music, London. His choral works have included commissions and first performances with the choirs of the University of New Mexico; St. Mary the Virgin, New York City; University of the South, Sewanee, Tennessee; St. Luke in the Fields, New York City; The Compline Choir, St. Mark’s Cathedral, Seattle; Vancouver Chamber Choir; Trinity College, Cambridge; Gonville and Caius College, Cambridge; and Westminster Cathedral. In 2010, he was a Visiting Composer at Gonville and Caius College, Cambridge. His compositions are published by Bardic Edition, Clarion Press, Encore Publications, GIA, and Paraclete Press.

As a researcher he has given lectures and performances at universities across North America and for chapters and conventions of the American Guild of Organists. He has also delivered papers at conferences of the American Musicological Society; British Institute of Organ Studies-Oxford University; College Music Society; Sound Thought, Glasgow University; Sewanee Church Music Conference; Society for Musicology in Ireland and the Royal Musical Association annual conference; International Conference of Music in Russia, University of Durham; Eighth Biennial Conference for Music in Nineteenth-Century Britain, Belfast.

The recipient of numerous honours, he was awarded a Fellowship by the Winston Churchill Memorial Trust (presented by HRH The Duchess of Kent) to research the historic organs of Brazil, an award from The Prince’s Trust to further cultural exchange within the European Union, and several ASCAPlus awards from The American Society of Composers, Authors and Publishers in recognition of performances of his works. In 2010 he was the recipient of a Louise Dyer award from Musica Britannica and in 2013 received a grant from the Music and Letters Trust.