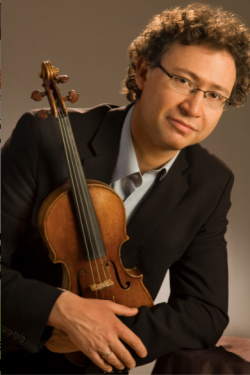 Velinzon made his Seattle Symphony solo debut in 2014, performing the Brahms Violin Concerto. Other recent solo performances included the Tchaikovsky Violin Concerto with the University of Washington Symphony Orchestra and the Cascade Symphony.

A longstanding member of the Walden Chamber Players, Velinzon has also performed with the Boston Symphony Chamber Players and Seattle Chamber Music Society. In 2010 Velinzon made his critically acclaimed debut at London’s Wigmore Hall with the Soloists of the London Philharmonic Orchestra. Cellist Wendy Warner and violinists Gil Shaham and Hilary Hahn have numbered among Velinzon’s many chamber partners.

Born in St. Petersburg, Russia, Velinzon began violin lessons at the age of 6 and went on to graduate from the Leningrad School for Gifted Children. After moving to the U.S. in 1990, he studied with renowned pedagogue Dorothy DeLay at The Juilliard School, where he earned his bachelor’s and master’s degrees. He made his New York recital debut at Carnegie Hall’s Weill Recital Hall, an occasion that promptedThe Strad magazine to praise him as “a very musical and intensely serious” player. His New York concerto debut came in 1999, when he performed Paganini’s Violin Concerto No. 1 in D major with Jupiter Symphony.