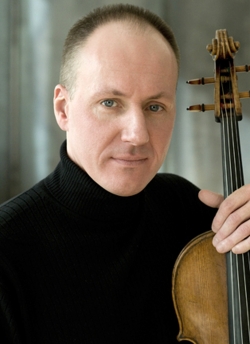 Violist Stephen Wyrczynski, Professor of Music at the Indiana University Jacobs School of Music, leads a master class with students of Melia Watras.

Violist Stephen Wyrczynski is a professor of music at the Indiana University Jacobs School of Music. He was a member of the Philadelphia Orchestra for 18 years, joining them in 1992.

He began violin studies at age 8 and eventually switched to the viola at age 16. In 1983, he began viola studies with Kim Kashkashian and later with Karen Tuttle at the Peabody Conservatory, where he became Tuttle's teaching assistant. He went on to receive his bachelor's degree in 1988 from Juilliard, where he continued to be her assistant. He was then accepted at the Curtis Institute of Music, where he studied with Joseph de Pasquale, then principal violist of the Philadelphia Orchestra. Wyrczynski earned a diploma there in 1991.

Wyrczynski keeps an active teaching schedule. He is also on the faculty of the Aspen Music Festival and School. In addition to teaching private lessons, he conducts a seminar in orchestral audition repertoire and techniques. He has taught at the New World Symphony in Miami, Florida, and Mannes College of Music in New York, where he does quarterly coachings in orchestral repertoire. He has previously taught orchestral studies at the Curtis Institute of Music, the National Orchestral Institute, and the New York State Summer School for Orchestral Studies.