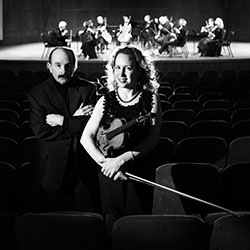 Mendelssohn: Quintet in B Flat Major

Jorja Fleezanis, violin
Jorja Fleezanis was concertmaster of the Minnesota Orchestra from 1989 to 2009—the longest-tenured concertmaster in the orchestra's history and only the second woman in the U.S. to hold the title of concertmaster in a major orchestra when appointed. Prior to Minnesota, she was associate concertmaster with the San Francisco Symphony for eight years and at age 23 began her orchestral career by joining the Chicago Symphony. In the fall of 2009 she was appointed the Henry A. Upper Chair in Orchestra Studies and Professor of Violin at the Jacobs School of Music at Indiana University.

Joan Blackman, Associate Concertmaster of the Vancouver Symphony, enjoys a vibrant and varied musical life.  She has performed and recorded as soloist with the Vancouver Symphony, Victoria Symphony, CBC Radio Orchestra, Turning Point Ensemble and the Banff Festival Orchestra, and has played chamber music with premier groups such as the Penderecki String Quartet and the Purcell String Quartet. She has appeared on the series Music in the Morning, Music Fest  Vancouver , the Pender Harbour Music Society Concert Series, The Jeffrey Concerts in London, Ont., and the American String Project, which brings together concertmasters and soloists throughout North America. Joan has appeared at numerous summer festivals including the Hornby Island Festival, the Pender Harbour Chamber Music Festival,  and the Victoria Summer Music Festival.   She is frequently heard in  on CBC radio. Ms. Blackman is also the Artistic Director of Vancouver’s Vetta Chamber Music Society, a longstanding and well respected Vancouver series  that celebrates its 30th anniversary next season.

“Shapelier phrases and sweeter tone would be hard to imagine”, “a ravishing tone”, “first rate soloist”, “exchanged lines meltingly in a flawless performance” “playing with lyricism, precision, and evident joy”; are some of the accolades that have graced Joan’s reviews. In 2010 Zach Carstensen of Seattle’s Gathering Note wrote “Your heart would need to be made of stone not to have loved Joan Blackman’s splendid solo “.

Joan is also an active teacher having been on faculty atthe University of British Columbia, Kwantlen College, the Symphony Orchestra Academy of the Pacific, Vancouver Academy of Music, and the VSO School of Music. She also adjudicates at festivals throughout BC.

Stephen Wyrczynski, viola
Violist Stephen Wyrczynski is a professor of music at the Indiana University Jacobs School of Music. He was a member of the Philadelphia Orchestra for 18 years, joining them in 1992.

He began violin studies at age 8 and eventually switched to the viola at age 16. In 1983, he began viola studies with Kim Kashkashian and later with Karen Tuttle at the Peabody Conservatory, where he became Tuttle's teaching assistant. He went on to receive his bachelor's degree in 1988 from Juilliard, where he continued to be her assistant. He was then accepted at the Curtis Institute of Music, where he studied with Joseph de Pasquale, then principal violist of the Philadelphia Orchestra. Wyrczynski earned a diploma there in 1991.

Wyrczynski keeps an active teaching schedule. He is also on the faculty of the Aspen Music Festival and School. In addition to teaching private lessons, he conducts a seminar in orchestral audition repertoire and techniques. He has taught at the New World Symphony in Miami, Florida, and Mannes College of Music in New York, where he does quarterly coachings in orchestral repertoire. He has previously taught orchestral studies at the Curtis Institute of Music, the National Orchestral Institute, and the New York State Summer School for Orchestral Studies.

Ani Kalayjian, cello
Hailed by the Los Angeles Times as “representing the young, up-and-coming generation,” and a “superb cellist with with a large, expressive, singing tone, passionate musicianship, and magnificent playing" by Journal Tribune, Grand Prize Winner of the International Chamber Music Competition of New England, Armenian-American cellist Ani Kalayjian enjoys an exciting career that has taken her to Japan, Australia, Canada, Europe, and the United Sates, both as a soloist and chamber musician.  Recognized for her innovative programs and passionate about expressing music to a wide audience, Ani has performed music from hospitals to concert halls, nursing homes, fundraisers and schools among other communities.  Most recently, she performed Haydn, Beethoven, & Schubert for the Princes of Qatar & Princess Eugenie of England at the Frick Museum. This season will include tours around the United States as a chamber music artist on the Cranbrook Music Series in Michigan, Brooklyn Historical Society in NY, Fortuna Concert Series in CA, Concerts International Memphis, among others and a commisioned world premiere by Polina Nazakinskaya as well as her debut at the Chateau de la Moutte festival in St. Tropez.

Ani was one of two cellists accepted into the inaugural season of David Finckel and Wu Han’s Music@Menlo festival.  She has also taken part in Michael Tilson Thomas’ Carnegie Hall workshop in NY, Pablo Casals Prades festival in France, Mendelsohn on Mull in Scotland, Banff in Canada, Sarasota/FL, Apeldoorn/Holland, London Masterclasses, New York String Seminar, Holland Music Sessions and the RNCM International Cello Festival in England.  At Prussia Cove, she was featured in a BBC documentary playing in a masterclass with Steven Isserlis.   Ani completed her Masters degree with Distinction at the Royal Northern College of Music as a student of Ralph Kirshbaum.  Undergraduate studies were at Mannes College of Music as a student of Timothy Eddy.  Passionate about teaching, Ani currently serves on faculty at the Elisabeth Morrow and Horace Mann schools in NJ & NY.