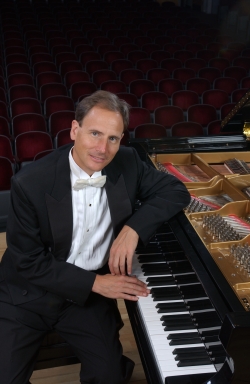 David Korevaar, professor of piano at the University of Colorado, leads a master class with UW piano students. Korevaar is a noted concert pianist well-versed in French music of the 19th century, an area of expertise he will explore during this session presented as part of the international conference  “Effable and Ineffable:  Gabriel Fauré and the Limits of Criticism,” hosted by UW Music and the Simpson Center for the Humanities Oct. 23 to 25.

David Korevaar, whose playing has been called a “musical epiphany” by Gramophone Magazine, performs an extensive repertoire as a soloist and chamber musician, and has been a guest artist with internationally-acclaimed orchestras and ensembles. His recently released recording of Bach’s Partitas captures his exquisite musical sensitivity and his finely tuned technique; it marks his 26th recording and his fourth dedicated to the music of Bach. His other recordings have explored a wide range of solo and chamber music, from Beethoven and Brahms to Dohnányi and Lowell Liebermann.

Korevaar is the Peter and Helen Weil Professor of Piano at the University of Colorado Boulder. He is also a member of the Clavier Trio, currently the ensemble-in-residence at the University of Texas, Dallas. He is a regular participant as performer and teacher at Colorado’s Music in the Mountains summer festival and the Music Center Japan.

By age 20, Korevaar had earned his Bachelor's and Master's degrees from the Juilliard School, where he studied piano with the American virtuoso Earl Wild and composition with David Diamond. Later, working with Abbey Simon, Korevaar received his Doctor of Musical Arts degree from the Juilliard School and was honored with the Richard French award for his doctoral document on Ravel's Miroirs. Other honors include top prizes from the University of Maryland William Kapell International Piano Competition (1988) and the Peabody-Mason Music Foundation (1985), as well as a special prize for his performance of French music from the Robert Casadesus Competition (1989). He has continued exploring French music, both as a performer and as a scholar, with recording projects and publications devoted to the music of Ravel and Fauré (in progress) and important work on the music collection of Ricardo Viñes, the first performer of many important works by Debussy and Ravel.

Korevaar and Tim Smith’s web-based exploration of the fugues of the Well-Tempered Clavier, by J.S. Bach received top honors from MERLOT (Multimedia Educational Resource for Learning and Online Teaching) both in music and overall, including the Editors' Choice Award. More recently, Korevaar and Smith collaborated on an exploration of Bach’s Goldberg Variations.

David Korevaar lives in Boulder, Colorado, and Dallas, Texas, with his family. He is a Kawai artist.