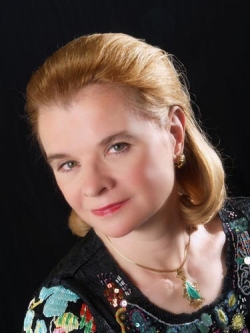 Philadelphia based concert pianist Lydia Artymiw has emerged as one of the most compelling and individual pianists of her generation.  She performs a recital on Nov. 9 and leads a master class with UW piano students on Nov. 10

“Lydia Artymiw has such a satisfying musical soul; she is a pleasure to hear” wrote Bernard Holland in a recent New York Times review. The recipient of both an Avery Fisher Career Grant and the Andrew Wolf Chamber Music Prize, Philadelphia-born Lydia Artymiw has emerged as one of the most compelling talents among pianists of her generation. She has performed with over one hundred orchestras world-wide, with many of the leading conductors of our time. American orchestral appearances include the Boston Symphony, Cleveland Orchestra, New York Philharmonic, Philadelphia Orchestra, Los Angeles Philharmonic, National Symphony, and with such orchestras as Cincinnati, Detroit, Pittsburgh, Kansas City, Minnesota, St. Louis, San Francisco, Seattle, and the St. Paul Chamber Orchestra. Solo recital tours have taken her to all major American cities, and she has also performed in Ireland, England, France, Scotland, Finland, Germany, Estonia, Italy, Ukraine, Poland, Switzerland, Korea, Taiwan, Singapore, New Zealand, Manila, Philippines and Shanghai and Beijing, China. Critics have acclaimed her seven solo recordings for the Chandos label, and she has also recorded for Centaur, Pantheon, Bridge, and Artegra. Festival appearances include Aspen, Bay Chamber, Bravo! Vail Valley, Caramoor, Chamber Music Northwest, Chautauqua, Grand Canyon, Hollywood Bowl, Marlboro, Montreal, Mostly Mozart, Seattle, and Tucson. Artymiw has collaborated with such celebrated artists as Yo-Yo Ma, Richard Stoltzman, Arnold Steinhardt, Michael Tree, Kim Kashkashian, and John Aler, Benita Valente (with whom she has recorded for Centaur and Pantheon), the Guarneri, Tokyo, American, Borromeo, Miami, Orion, and Shanghai Quartets, and has toured nationally with Music from Marlboro groups. Along with Arnold Steinhardt (first violinist of the Guarneri Quartet) and Jules Eskin (principal cellist of the Boston Symphony), she is a member of the Steinhardt-Artymiw-Eskin Trio.

A recipient of top prizes in the 1976 Leventritt and the 1978 Leeds International Competitions, she graduated from Philadelphia’s University of the Arts and studied with Gary Graffman for twelve years.