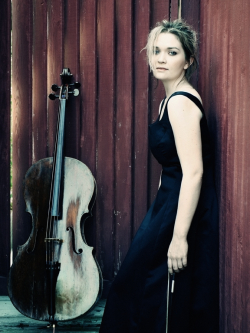 Newly appointed artist-in-residence, cellist Sæunn Thorsteinsdóttir, is joined by pianist Elizabeth Joy Roe in this cello and piano recital.  Works by Beethoven, Britten and Rachmaninoff showcase the breadth and depth of the cello repertoire.

“Charismatic” (NYTimes) cellist, Sæunn Thorsteinsdóttir recently made her debut with the Los Angeles Philharmonic which the LA Times praised her for her “emotional intensity”.  Following the release of her recording of Britten´s Suites for Solo Cello, last season she performed in some of the world´s greatest halls including Carnegie Hall, Suntory Hall and Disney Hall.  This season will mark her debut with the Toronto Symphony and  starting in the fall of 2013, Sæunn is Artist-in-Residence at Sonoma State University´s Green Music Center in California.

2013-2014 will also be Sæunn´s inaugural season as cellist of the Manhattan Piano Trio, beginning with her debut concert at the Chautauqua Music Festival.  An avid chamber musician, she has collaborated in performance with Itzhak Perlman, Mitsuko Uchida, Richard Goode and members of the Emerson, Guarneri and Cavani Quartets and has participated in numerous chamber music festivals, including Prussia Cove and Marlboro, with whom she has toured.

Along with the masterpieces of the 18th, 19th and 20th century, Sæunn is constantly inspired by works composed in our time and enjoys working with living composers.  In addition to working closely with Daníel Bjarnason on his award-winning composition “Bow to String”, she has premiered dozens of works, including new pieces by Peter Schikele, Paul Schoenfield, Anna Thorvaldsdóttir and Kendall Briggs.

Sæunn has garnered numerous top prizes in international competitions, including the 2008 Naumburg Competition in New York and the Antonio Janigro Competition in Zagreb, Croatia. She received a Bachelor of Music from the Cleveland Institute of Music and a Master of Music from The Juilliard School. Her principal teachers include Richard Aaron, Tanya L. Carey and Joel Krosnick.

Pianist ELIZABETH JOY ROE has been hailed “brilliant” (The New York Times), “an artist to be taken seriously” (The Chicago Tribune), “electrifying” (The Dallas Morning News), “a mature, fascinating interpreter and an artist of intelligence, insight, and a genuine grace” (The Southampton Press), and she was named one of the classical music world's “Six on the Rise: Young Artists to Watch” by Symphony Magazine. The recipient of the prestigious William Petschek Piano Debut Recital Award, she has appeared as recitalist, orchestral soloist, and collaborative musician at major venues worldwide, including Carnegie Hall, Lincoln Center, and the 92nd Street Y (New York); the Kennedy Center (Washington, DC); Salle Cortot (Paris); the Ravinia Festival (Chicago); the Seoul Arts Center (Korea); the National Center for the Performing Arts (Beijing); the Oriental Art Center (Shanghai); Teatro Argentino (Buenos Aires); the Adrienne Arsht Center (Miami); the Banff Centre (Canada); and the Festspiele Mecklenburg-Vorpommern (Germany). She has given the Carnegie Hall premiere of Messiaen’s Visions de l’Amen for the composer's centennial celebration, hosted by Pierre Boulez; performed for members of the United Nations; presented at international leadership symposia including the EG, Imagine Solutions Conference, La Ciudad de las Ideas, and Chicago Ideas Week; and completed an artistic residency sponsored by the U.S. Embassy in Argentina.

Ms. Roe’s multifaceted career includes performance broadcasts on the BBC, NPR, PBS, and KBS; new music premieres; and a diverse range of artistic projects and collaborations. Her discography comprises a solo album, Images Poetiques (Universal Classics Korea / Deutsche Grammophon), and four piano duo albums, of whichWhen Words Fade (Steinway Label) spent over a dozen weeks at the top of the Billboard classical chart. An avid chamber musician, she has collaborated with an array of esteemed artists, including violinist Daniel Hope, violist Richard O’Neill, cellist Ralph Kirshbaum, the Parker Quartet, and jazz pianist Shelly Berg; she is also a founding member of Decoda (the first ever Affiliate Ensemble of Carnegie Hall) and Trio Ariadne (ensemble-in-residence at the Green Music Center in California). Most notably, she co-created the groundbreaking Anderson & Roe Piano Duo, whose concerts, compositions, social media presence (including a blog featured in Gramophone), and Emmy-nominated music videos (viewed by millions on YouTube) have captivated audiences around the globe.

Ms. Roe made her concerto debut in 1997 with the Chicago Philharmonic, eliciting critical acclaim from The Chicago Tribune’s John Von Rhein: “Elizabeth Joy Roe supplied scintillation in the Grieg [Concerto] ... A lot of pianists play the Grieg but not many adults twice the age of Miss Roe could make this familiar score sing so poetically or with such spontaneity.” She has since appeared with the Hartford, Tucson, Santa Fe, Indianapolis, Milwaukee, Corpus Christi, Lubbock, and Ars Viva Symphony Orchestras; the Juilliard Orchestra; the Seongnam Philharmonic Orchestra; the Indianapolis and Milwaukee Chamber Orchestras; and members of the Metropolitan Opera Orchestra, among others. In 2003, she stepped in on short notice to replace the late John Browning for subscription performances of the Barber Piano Concerto (Browning’s signature work) with the Delaware Symphony Orchestra; The Delaware News Journal pronounced her pianism as “astonishing” and “stunning.”

Committed to arts advocacy, Ms. Roe was one of the inaugural fellows of The Academy—a program of Carnegie Hall, The Juilliard School, and The Weill Music Institute. As part of this professional fellowship, she performed regularly at Carnegie Hall with Ensemble ACJW, taught at PS 131Q in Queens, and co-directed the Children's Music Campaign NYC. In recognition of her educational and leadership endeavors, she was awarded the McGraw-Hill Companies’ Robert Sherman Award for Music Education and Community Outreach. She has taught at Smith College as Visiting Artist and Lecturer in Music, and she is currently an Artist-in-Residence at Sonoma State University.

A Chicago native, Ms. Roe was 13 years old when she won the grand prize at the IBLA International Piano Competition in Italy. Throughout her career she has received honors from the National Foundation for Advancement in the Arts, the Music for Youth Foundation, the National Association for Professional Asian Women, and the Samsung Foundation of Culture. She earned her bachelor’s and master’s degrees from The Juilliard School as a full scholarship student of Yoheved Kaplinsky, graduating with Scholastic Distinction for her thesis on representations of music in the fiction of Thomas Mann, Marcel Proust, and E.M. Forster. A Steinway Artist and Soros Fellow, Ms. Roe’s mission is to connect with others through the inspiration, joy and essential humanity of music.