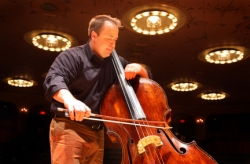 Maximilian Dimoff, principal bass of the Cleveland Orchestra, performs a recital on December 13th, and leads a master class with students of  Barry Lieberman on December 12th.

Since Maximilian Dimoff’s appointment in 1997 as principal double bass of The Cleveland Orchestra, he has appeared as soloist with the Orchestra at Severance Hall and Blossom Music Center, as well as on tour at Carnegie Hall and in Europe. Mr. Dimoff’s career began with an appointment as assistant principal bass of the San Antonio Symphony while he was still a student at Northwestern University. He was soon promoted to the principal bass position in San Antonio. Mr. Dimoff was also a member of the Grant Park Symphony Orchestra in Chicago. In 1993, Mr. Dimoff moved back to his hometown of Seattle to join the Seattle Symphony Orchestra.

Mr. Dimoff studied with Jeff Bradetich while attending Northwestern University. Other influential teachers include Warren Benfield of the Chicago Symphony Orchestra, Gary Karr, Eugene Levinson of the New York Philharmonic, and Ronald Simon of the Seattle Symphony. Mr. Dimoff has taught masterclasses at major music schools including the Juilliard School, the Manhattan School of Music, Northwestern University, Carnegie Mellon University, the University of North Texas, the University of Michigan, and the Glenn Gould School at the Royal Conservatory in Toronto.

Currently, Mr. Dimoff heads the double bass department at the Cleveland Institute of Music. He is also a coach and teacher with the New World Symphony in Miami. He performs on a double bass dating from 1651 by the Italian maker Antonio Mariani.