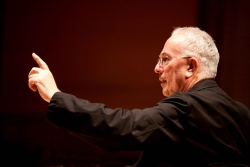 The student-led Improvised Music Project presents "An Afternoon with Michael Gibbs," a masterclass on jazz, harmony, composing, and arranging.  Jazz composer/arranger Michael Gibbs collaborates with his former student and renowned jazz guitarist Bill Frisell at the UW on Thursday, January 14th, 2016 with the UW Symphony and Jazz Studies Faculty, and again on Friday, January 15th, 2016 with the UW Big Band and Jazz Studies Faculty.