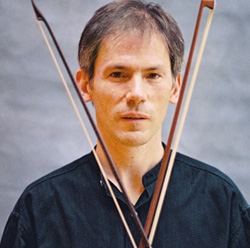 The School of Music and the Center for Digital Arts and Experimental Media present a program of new and improvised music by internationally renowned violist Garth Knox, joined by facult violist Melia Watras and students from the UW viola studio.

Garth Knox was born in Ireland and grew up in Scotland. Being the youngest of four children who all played string instruments, he was encouraged to take up the viola, and he quickly decided to make this his career. He studied at the Royal College of Music in London with Fredrick Riddle, where he won several prizes for viola and for chamber music. Thereafter he played with most of the leading groups in London in a mixture of all repertoires, from baroque to contemporary music.

In 1983 he was invited by Pierre Boulez to become a member of the Ensemble Intercontemporain in Paris, where he had the chance to do much solo playing (including concertos directed by Pierre Boulez) and chamber music, touring widely and playing in international festivals.
In 1990 Garth Knox joined the Arditti String Quartet, playing in all the major concert halls of the world, working closely with and giving first performances of pieces by most of today's leading composers including Ligeti, Kurtag, Berio, Xenakis, Lachenmann, Cage, Feldman and Stockhausen (the famous "Helicopter Quartet").

Since leaving the quartet in 1998, Garth Knox has given premieres by Henze (the Viola Sonata is dedicated to him), Ligeti, Schnittke, Ferneyhough, James Dillon, George Benjamin and many others. He also collaborates regularly in theatre and dance projects and has written and performed shows for children and young audiences. Improvisation is also an important part of his musical activity, and he has performed with George Lewis, Steve Lacy, Joel Léandre, Dominique Pifarély, Bruno Chevillon, Benat Achiary, Scanner and many others. He appears on the Frode Haltli CD Passing Images. In the past decade he has begun to write his own music, and is much in demand for theatre, dance and film scores as well as concert pieces and instrumental works.

Garth Knox has recently begun to explore the possibilities of the viola d'’amore in new music, with and without electronics, and is in the process of creating a new repertoire for this instrument. His CD D'Amore (EMI New Series 1925) features old and new music for the viola d'amore.

Garth Knox now lives in Paris playing recitals, concertos and chamber music concerts all over Europe, the USA and Japan. His solo CD with works from Ligeti, Dusapin, Berio, Kurtág and others (MO 782082) won the coveted Deutsche Schallplaten Preis in Germany.