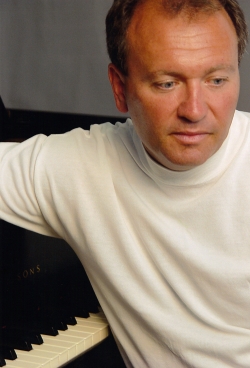 A native of the San Francisco Bay Area, pianist Mark Anderson’s performances as recitalist, soloist and chamber musician have met with wide critical acclaim. He has appeared as soloist with conductors such as Sir Simon Rattle, Nicholas McCegan, William Boughton, George Cleve, and Adam Fischer. In recital, Mark has appeared at New York’s Alice Tully Hall and Weill Hall, the Kennedy Center and the Phillips Gallery in Washington D.C., London's Wigmore Hall and Zurich's Tonhalle and elsewhere throughout Europe and the United States. In addition, his performances have been featured on BBC Radio 3, the CBC in Canada, and on radio and television in Spain, Italy, Ireland, Japan and the United States.

Mr. Anderson records exclusively with Nimbus Records and has released recordings of works by Liszt, Schumann, Brahms and Dohnanyi, Copland and Gershwin, Mussorgsky and Stravinsky. He has recorded the complete solo piano works of Hans von Bülow for Nimbus in two discs released in 2010 and 2013. In his most recent research and recording project, he features the solo piano music of the Dutch composer Julius Röntgen, the first disc having been released in February 2015. The next disc will be recorded in July 2015 at Nimbus Records at Wyastone, UK.

In the United States, Mark Anderson was a student of Aiko Onishi while in the UK he studied with Ryszard Bakst and, most notably, Benjamin Kaplan in London. Mr. Anderson holds a bachelor degree in piano performance from San Jose State University as well as post-graduate degrees from the Royal Northern College of Music in Manchester, and the Royal Academy of Music in London where he continued his studies on a Fulbright Scholarship.

In 2005, Mark Anderson founded New World Music Academy in Pleasanton, California. The academy continues to teach and inspire students of all ages and is an innovator in group piano teaching techniques. Mr. Anderson is often invited to adjudicate regional, national and international piano competitions and teaches at the newly established New World Music Academy Summer Festival.

Mark Anderson was appointed Assistant Professor of Piano, Chamber Music and Piano Pedagogy at University of British Columbia School of Music in 2012. His students regularly participate and are often laureates of local, regional, national and international competitions. In addition to teaching, he makes solo, concerto and chamber appearances. Most recently, he has been active with his piano-duo and life partner Canadian pianist Michelle Mares.