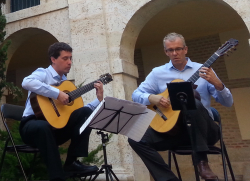 Faculty artist Michael Partington is joined by Marc Teicholz of the San Francisco Conservatory for an evening of music composed or arranged for two guitars, including works by Manuel de Falla, Fernando Sor, Johannes Brahms and others.

Michael Partington is one of the most engaging of the new generation of concert players. Praised by Classical Guitar Magazine for his "lyricism, intensity and clear technical command," this award-winning British guitarist has performed internationally as a soloist and with ensemble to unanimous critical praise. Audiences are put at ease by his charming stage manner and captivated by his musical interpretations. His innate rhythmic understanding and sense for tonal colour combine to form some of the most memorable phrasing to be heard on the guitar.

He began playing guitar at age 6 while growing up in Wales, gave his first public performance at age 7 and won his first competition at age 9. He has trained with many of the world's greatest guitarists, including Oscar Ghiglia, Eliot Fisk, Eduardo Fernandez, Manuel Barrueco and David Russell, who commented on his "exquisite good taste and fluid perfection."

Mr. Partington has appeared throughout the USA, UK, Canada, Russia and Scandanavia in solo recital, with orchestra and in chamber ensembles. His North American appearances include the first solo guitar recital in Seattle's Benaroya Hall, as well as Town Hall and Meany Theater in Seattle, Austin, Los Angeles, New Haven, Phoenix, Portland, Reno, San Francisco, Vancouver and many others. Concerts in England and Wales have included Blackheath Halls, the Royal College of Music, St. Martin-in-the-Fields and St. James', Piccadilly in London; the Royal Welsh College of Music and Drama in Cardiff; St. Mary in the Castle, Hastings; Bristol Music Club; Russell-Cotes Museum, Bournemouth; Brewery Arts Centre, Kendall; Trinity Arts Centre, Tunbridge Wells; Nottingham; Carlisle; Derby; and others. He has performed live on BBC Radio 3's In Tune, BBC Radio Bristol, BBC Wales and Great Western Radio in the UK, as well as St. Paul Sunday on National Public Radio in the US, KUOW, KING FM, KZAZ, and KAOS in Washington, JPR in Oregon, KUT in Texas, and cable television in California, Montana and Washington.

An advocate of new music, he has commissioned and premiered works by Stephen Goss, Bryan Johanson, Toshio Hosokawa, Angelo Gilardino, Tom Baker, Kevin Callahan and others. He is a frequent performer and teacher at festivals, including the Guitar Foundation of America Festival, Llantilio Crossenny Festival, Portland Guitar Festival, Northwest Guitar Festival, Shenandoah Valley Bach Festival, Cascadia Festival and Chelan Bach Fest. He has also performed with Orchestra Seattle, Seattle Chamber Players, Seattle Creative Orchestra, Wenatchee Valley Symphony, Rainier Symphony, Portland State University Orchestra, Seattle Symphony Chorale, Seattle Choral Company, and flutist Paul Taub in the duo Dinamici. Mr. Partington is frequently invited to adjudicate or sit on the jury for local, national and international competitions in the US and Canada, including the Guitar Foundation of America competition, the National finals for the Federation of Canadian Music Festivals, the Music Teachers of North America national finals and the Portland Guitar Competition. His recordings are available on the Rosewood Recordings, Present Sounds and Cadenza Music labels. He currently lives in Seattle where he is director of the Guitar Program at the University of Washington.

Guitarist Marc Teicholz was awarded first prize at the 1989 International Guitar Foundation of America Competition, the largest, most prestigious contest of its kind in the United States. He was also a prize winner at the 1991 New York East-West Artists Competition.

Described by Gramophone as “arguably the best of the new young guitarists to have emerged,” and by Soundboard magazine as “among the best we have ever heard,” Teicholz’s performances throughout the world include tours of the United States, Canada, Russia, Poland, Switzerland, Southeast Asia, New Zealand and Fiji. His recitals and master classes have received critical acclaim, and he has been featured in concert with orchestras in Spain, Portugal, California and Hawaii.

He has also had new works written specially for him. Teicholz tours the United States extensively with The Festival of Four. He is featured on the pilot soundtrack for George Lucas’ Young Indiana Jones, and has recorded solo CDs for Naxos, Sugo, Menus and Music, and most recently, Guitar Salon International. His latest disc, Valseana, presents works performed on historic guitars of the period of each musical selection.

For Naxos, Marc Teicholz has made his mark with two collections of Sor’s music already committed to disc. In a show of his versatility, he has also recorded the fifth volume of the collected works for guitar by the 19th Century French virtuoso guitarist and composer Napoleon Coste.

Teicholz, currently on the faculty of the San Francisco Conservatory, teaches in the summer at the California Summer Arts Festival and the Weatherfield Music festival in Vermont. He received his Bachelor’s and Master’s degrees from the Yale School of Music, and holds a J.D. from the University of California Berkeley Boalt School of Law.