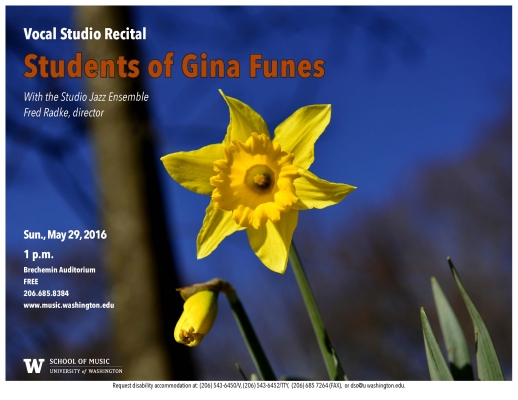 Vocalist Gina Funes joined the School of Music faculty in Fall 2010 as a part-time artist-in-residence. Her professional singing career has included roles in Mimi, La Boheme, The Magic Flute, and The Marriage of Figaro with the Seattle Little Opera Company and the University of Washington Festival Opera Company as well as engagements with the Seattle and Portland Symphony Orchestras.

As a nightclub performer, she has appeared with such artists as Glenn Yarborough, Miriam Makeba, George Burns, Connie Stevens, Tony Bennett, the Modernaires, Pete Barbutti, Johnnie Ray, and Mel Torme. She has appeared as a featured singing artist at Seattle's Fairmont Olympic Hotel and frequently appears in performances around the world as guest singing artist for the Harry James Orchestra, directed by her husband, Fred Radke.