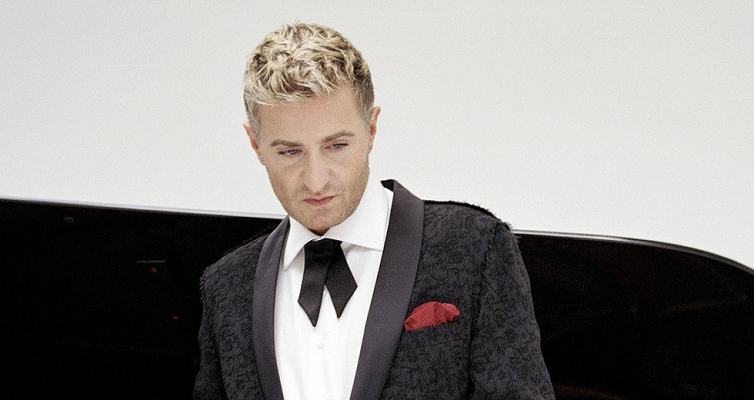 One of today’s most sought-after soloists, Jean-Yves Thibaudet has the rare ability to combine poetic musical sensibilities and dazzling technical prowess. His talent at coaxing subtle and surprising colors and textures from each work he plays led The New York Times to write that “every note he fashions is a pearl…the joy, brilliance and musicality of his performance could not be missed.” Thibaudet, who brings natural charisma and remarkable musical depth to his career, has performed around the world for more than 30 years and recorded more than 50 albums.

Jean-Yves Thibaudet's 2014-2015 season is an intriguing combination of a wide variety of music: a balance of orchestral appearances, chamber music, and recitals and a repertoire that includes familiar pieces, unfamiliar work by well-known composers, and new compositions. He also follows his passion for education and fostering the next generation of performers by becoming the first-ever resident artist at the Colburn School of Los Angeles this year and the following two. Summer 2014 sees him touring with Mariss Jansons and the Royal Concertgebouw Orchestra at the Concertgebouw Amsterdam, the Edinburgh International Festival, the Lucerne Festival, and the Ljubljana Festival. Mr. Thibaudet then travels to play Gershwin paired with a new piano concerto “Er Huang” by Quigang Chen with Long Yu conducting to open the China Philharmonic season in Beijing—a program both artists will repeat in Paris with the Orchestre de Paris. In October, with the Philadelphia Orchestra and its Music Director Yannick Nézet-Séguin, he performs the Khachaturian Piano Concerto, which he also plays in the spring with the Cincinnati Symphony and on tour in Germany and Austria with the Deutsches Symphonie-Orchester Berlin under the baton of Tugan Sohkiev. After concerts in Prague, Mr. Thibaudet embarks on a US tour with the Czech Philharmonic Orchestra in November, reaching both East and West coasts with a grand finale at Carnegie Hall, where he performs Liszt's Piano Concerto No. 2. The end of the year is a whirlwind of Gershwin, Ravel, and Liszt with the Radio Symphony Orchestra Stuttgart, the Berlin Radio Symphony Orchestra, the Oslo Philharmonic Orchestra, and the Gürzenich Orchestra Cologne.

In the new year, audiences can hear Mr. Thibaudet play MacMillan’s Piano Concerto No. 3, which he premiered in 2011, with the St. Louis Symphony and New York Philharmonic, both conducted by Stéphane Denève, and then Liszt with the Cleveland Orchestra and the Naples Philharmonic. After playing a duo recital with Gautier Capuçon in his native France at the Festival de Pâques in Aix-en-Provence, Mr. Thibaudet returns to the United States to play Ravel's Piano Concerto in G Major—one of his signature pieces from the French repertoire for which he is renowned—with the Atlanta Symphony Orchestra and the Boston Symphony Orchestra under Bernard Haitink's direction, in addition to Poulenc and Fauré with the Boston Symphony Chamber Players. Under Michael Tilson's Thomas's baton, he performs Bernstein's Age of Anxiety in San Francisco, where he celebrates Thomas's 70th birthday earlier in the year by playing the Liszt Hexaméron with Emanuel Ax, Jeremy Denk, Yuja Wang, and Marc-André Hamelin. Mr. Thibaudet performs Ravel's Piano Concerto for the Left Hand with Gustavo Dudamel and the Los Angeles Philharmonic before interpreting both the Ravel Piano Concerto and Messiaen's Turangalîla with the Chicago Symphony Orchestra and Esa-Pekka Salonen as part of the orchestra's 2015 Reveries and Passions Festival. He then travels to Europe to perform with the Frankfurter Museumsorchester (Venzago), Dresden Philharmonic (de Billy), and the Munich Philharmonic (Bychkov), among others, before ending the season in dramatic fashion with Beethoven's Choral Fantasy with the Orchestre de L’Opéra de Paris under the baton of Music Director Philippe Jordan.

A distinguished recording artist, Jean-Yves Thibaudet has been nominated for two Grammy Awards and won the Schallplattenpreis, the Diapason d'Or, Choc du Monde de la Musique, a Gramophone Award, two Echo awards, and the Edison Prize. In 2010 he released Gershwin, featuring big jazz band orchestrations of Rhapsody in Blue, variations on “I Got Rhythm,” and Concerto in F live with the Baltimore Symphony and music director Marin Alsop. On his Grammy-nominated recording Saint-Saëns, Piano Concerti Nos. 2&5, released in 2007, Thibaudet is joined by long-standing collaborator Charles Dutoit and the Orchestre de la Suisse Romande. Thibaudet's Aria—Opera Without Words, which was released the same year, features transcriptions of arias by Saint-Saëns, R. Strauss, Gluck, Korngold, Bellini, J. Strauss II, Grainger, and Puccini; some of the transcriptions are by Mikhashoff, Sgambati, and Brassin, and others are Thibaudet's own. Among his other recordings are Satie: The Complete Solo Piano Music and the jazz albums Reflections on Duke: Jean-Yves Thibaudet Plays the Music of Duke Ellington and Conversations With Bill Evans, his tribute to two of jazz history's legends.

Known for his style and elegance on and off the traditional concert stage, Thibaudet has had an impact on the world of fashion, film and philanthropy. His concert wardrobe is by celebrated London designer Vivienne Westwood. In 2004 he served as president of the prestigious Hospices de Beaune, an annual charity auction in Burgundy, France. He had an onscreen cameo in the Bruce Beresford feature film on Alma Mahler, Bride of the Wind, and his playing is showcased throughout the soundtrack. Thibaudet was the soloist on Dario Marianelli’s Oscarand Golden Globe-award winning score for the film Atonement and his Oscar-nominated score for Pride and Prejudice. He recorded the soundtrack of the 2012 film Extremely Loud & Incredibly Close, composed by Alexandre Desplat. He was also featured in the 2000 PBS/Smithsonian special Piano Grand!, a piano performance program hosted by Billy Joel to pay tribute to the 300th anniversary of the piano.

Jean-Yves Thibaudet was born in Lyon, France, where he began his piano studies at age five and made his first public appearance at age seven. At twelve, he entered the Paris Conservatory to study with Aldo Ciccolini and Lucette Descaves, a friend and collaborator of Ravel. At age fifteen, he won the Premier Prix du Conservatoire and, three years later, the Young Concert Artists Auditions in New York City. In 2001 the Republic of France awarded Thibaudet the prestigious Chevalier dans l'Ordre des Arts et des Lettres, and in 2002 he was awarded the Premio Pegasus from the Spoleto Festival in Italy for his artistic achievements and his long-standing involvement with the festival. In 2007 he received the Victoire d'Honneur, a lifetime career achievement award and the highest honor given by France's Victoires de la Musique. The Hollywood Bowl honored Thibaudet for his musical achievements by inducting him into its Hall of Fame in 2010. Previously a Chevalier of the Ordre des Arts et des Lettres, Thibaudet was promoted to the title of Officier by the French Minister of Culture in 2012.