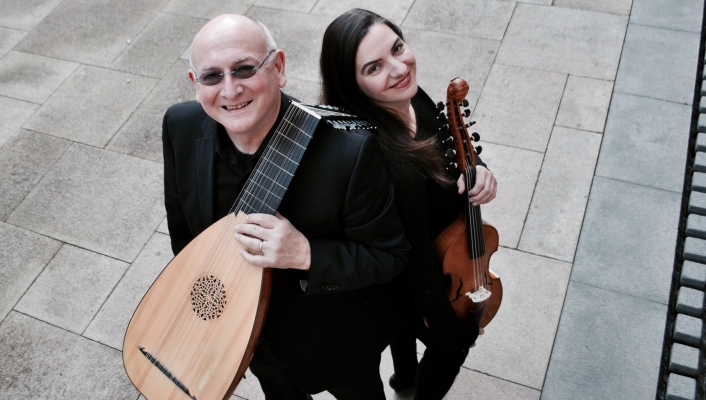 Faculty artists Stephen Stubbs (lute and baroque guitar) and Tekla Cunningham (violin) are driving forces behind the success of ensemble-in-residence Pacific Musicworks, whose reputation for excellence has been confirmed through consistently high-quality programming at the UW and in the greater arts region. The musicians’ instrumental and improvisational agility is on display in this program of music performed in the “free and fantastic style”— the free-form, quasi-improvised violin music of the 17th century. The PMW cohorts are joined by colleague Maxine Eilander (harp) and Henry Lebedinski, organ and harpsichord, in this performance featuring music by Farina, Fontana, Schmelzer,  Biber and others.

After a thirty year career in Europe, musical director and lutenist Stephen Stubbs returned to his native Seattle in 2006. Since then he has established his production company, Pacific Musicworks, and developed a busy calendar as a guest conductor specializing in baroque opera and oratorio.

Seattle based harpist Maxine Eilander plays on a range of specialized early harps: the Italian triple strung harp, the Spanish cross-strung harp, the German ‘Davidsharfe’, the Welsh triple harp for which Handel wrote his harp concerto, and the classical single action pedal harp.

Maxine was born in The Netherlands and grew up in South Africa, where she earned her Bachelor of Music on the classical harp. Her special interest in early music led her to further study at the Hochschule für Kunste in Bremen, Germany, where she completed her post-graduate diploma in early harps and continuo practice. Since then she has appeared as a soloist with many leading ensembles including Tragicomedia and Tafelmusik. Maxine has performed at numerous opera houses and festivals including Boston Early Music Festival, Covent Garden Festival, Staatstheater Stuttgart and Netherlands Opera, playing continuo in productions of various baroque operas and chamber music. In 2012 Maxine was invited to perform Handel’s Harp Concerto at the World Harp Congress in Vancouver, B.C.. From 2005 to 2012, Maxine managed the Accademia d’Amore baroque opera workshops in Seattle. As an administrator, Maxine was the Director of Education for Pacific MusicWorks since 2007, and in 2013 became PMW’s Managing Director.

There is an increasing list of recordings featuring Maxine as a soloist. She has recorded Handel’s Harp, released on ATMA in 2009, with all of Handel’s obligato music written for the harp, including his famous harp concerto, which she has also recorded with Tafelmusik (A Baroque Feast, Analekta, 2002). The 2008 release of William Lawes’ Harp Consorts on ATMA garnered much favorable press, including five stars from Goldberg Magazine. Other recordings include: Sonata al Pizzico, a recording of Italian music for harp and baroque guitar with duo partner Stephen Stubbs (ATMA 2004), and Teatro Lirico released on the ECM label in 2006, Ay que si, Spanish 17th century music with Les Voix Humaines (ATMA, 2002), Scarlatti’s oratorio Hagar and Ishmael, with Seattle Baroque (Centaur, 2003), and Monteverdi’s Vespro della Beata Vergine, with Tragicomedia (ATMA, 2002), and 2005 Grammy nominated Conradi’s Ariadne for the Boston Early Music Festival (CPO, 2005).

Hailed by The Miami Herald for his “superb continuo… brilliantly improvised and ornamented,” Henry Lebedinsky performs on historical keyboards across the United States and the United Kingdom, both as a soloist and as a member of Agave Baroque, Pacific MusicWorks, The Vivaldi Project, The Sonoma Bach Society and The Live Oak Baroque Orchestra. He has also played with The St. Paul Chamber Orchestra, The Charlotte Symphony, Seraphic Fire, Boston Revels, and the Harvard Baroque Orchestra, among others. With his ensemble The Seicento String Band, he has been featured on American Public Media’s Performance Today, and he has performed live on APM’s Pipedreams. He is the founder of the Music @ St. Alban’s concert series in Davidson, North Carolina, and served as interim Artistic Director of Charlotte Chamber Music, Inc. and Director of Rochester, NY’s The Publick Musick. Mr. Lebedinsky has taught master classes and workshops on historical keyboards and performance practice at Edinburgh University, Bowdoin College, Davidson College, The University of North Carolina School of the Arts, Appalachian State University, and the American Guild of Organists’ 2014 National Convention.

An avid composer of sacred music for choir and organ, his works are published by Carus-Verlag Stuttgart and Paraclete Press. His poetry and hymns have appeared in Fresh Day Magazine and have been sung in churches across the country. His editions of vocal works of 17th century nun composers for Saltarello Editions have been performed around the world, most recently in France, South Korea, and Lebanon. Lebedinsky holds degrees from Bowdoin College and the Longy School of Music, where he earned a Master of Music in historical organ performance as a student of Peter Sykes. When not at a keyboard instrument, he plays guitar and bouzouki with the Celtic traditional music bands Earl’s Chair and The Beggar Boys, who were recently featured in National Public Radio’s syndicated holiday special A Celtic Christmas from Biltmore Estate with Kathy Mattea. Unable to not rock the boat wherever he finds himself, he is the founding director of the guerrilla performance organization Early Music Underground. A church musician for the past 23 years, he currently serves as Director of Music at Christ Episcopal Church in Seattle.