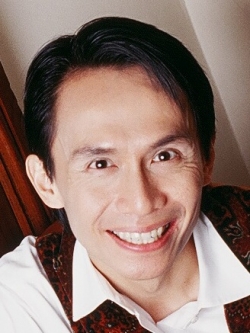 Eduardus Halim has captured the imagination of piano lovers the world over with the originality and maturity of his interpretations. An ethnic Chinese who was born in Indonesia and given a Muslim name, he studied the violin and piano as well as Javanese dancing before moving to New York, where he established himself as a pianistic force and earned the rare privilege of becoming the last pupil of the legendary Vladimir Horowitz.

Under his first teacher, Hungarian pianist Alfonse Becalel, Mr. Halim developed rapidly and performed Beethoven's Third Piano Concerto at the age of 11 and, gave his debut recital at 13. Of his next teacher, the Belgian-trained Stephen Michael Sulungan, Mr. Halim recounts, "Often, his lessons amounted to a kind of supervised practice .... Later, Mr. Horowitz did something similar for me."

In 1980, he moved to New York to study at the Juilliard School with the legendary pedagogue Sascha Gorodnitzky, an icon of the Russian romantic tradition. "Under his guidance I found a new sense of discipline and learned how to work on something for a long time, in great detail," Mr. Halim says.

Four years later, after Gorodnitzky's passing, Mr. Halim turned to the distinguished Rudolf Firkušný who became a mentor. "He worked with me in interpreting such varied forms as those in Schumann's Davidsbündlertânze and the concerti of Brahms and Schumann," recalls Mr. Halim.

When Harold C. Schonberg, chief music critic of The New York Times and author of The Great Pianists, heard Mr. Halim, he was struck by the pianist's bold interpretations of the Romantic repertoire. Mr. Schonberg wrote a letter about the young man's unusual potential to Vladimir Horowitz. Music author/broadcaster David Dubal, a member of Juilliard’s faculty, took Mr. Halim to meet the great virtuoso. The result: forty lessons of crucial importance - at a key time in the pianist’s development. The chapter entitled "Last Pupil" in the Schonberg biography, Horowitz, His Life and Music, is devoted to this extraordinary relationship between mentor and pupil.

Mr. Schonberg bequeathed to Mr. Halim his music library and Steinway piano which had been personally selected by the pianist Leopold Godowski for the use of Mr. Schonberg’s aunt.

Mr. Halim has performed recitals at prestigious venues around the world, including Alice Tully Hall and the 92nd Street Y in New York, and the Kennedy Center in Washington. Festival appearances have taken him to Ravinia, Grant Park, Newport, Stockholm, the Minnesota Orchestra's Viennese Sommerfest and Wyoming's Grand Teton Festival. In 1997 he made a triumphant recital debut at Wigmore Hall in London which led to an invitation from the BBC for a broadcast concert the following season.

In December 1999, he was the invited soloist for the Milwaukee Symphony’s historic performance in Havana, Cuba. It was the first U.S. ensemble to appear since the embargo in more than 40 years.

Other career highlights include a performance of the Beethoven's Chorale Fantasy conducted by Jahja Ling at Carnegie Hall and recitals of Granados's Goya-inspired piano suite "Goyescas" at the Frick Collection in New York, the Gardner Museum in Boston and Arizona's Scottsdale Center for the Arts.

Mr. Halim's recordings include Presenting Eduardus Halim: A Program of Piano Transcriptions on the Arabesque label, and two discs devoted to Granodos and Chopin on the Reservoir Studio Productions label. Of the Chopin album, Stephen Wigler of Amazon.com wrote, "Anyone who misses Vladimir Horowitz would be wise to investigate this all-Chopin recital by Eduardus Halim, the last of the master's students. He is a born Chopinist .... Rather than call him his master's disciple, it would be better to call him his successor." Eduardus Halim Plays Chopin was named one of the top classical instrumental CDs by Amazon.com/newCDnews.com.

Mr. Halim's distinctive approach to the piano is matched by a charismatic personality that has captured the attention of the media. He has been profiled by The New York Times (Arts & Leisure), The New York Times Magazine, Vogue, Vanity Fair, Piano Quarterly and Clavier.

Mr. Halim's 2011-2012 season highlights include a solo recital at NYU as part of Steinhardt Piano Studies' celebration of Franz Liszt's Bicentennial Birthday, and a lecture/recital of Liszt's Transcendental Etudes at the 2011 NJMTA Conference.Additional concerts are scheduled for Sacramento, CA; Newport, Oregon; Seoul National University in South Korea; and the Janacek Academy in Brno, Czech Republic in a Centennial Festival honoring his teacher, Rudolf Firkušný.

Mr. Halim’s awards and honors include the Young Concert Artists International Auditions as well as the Avery Fisher Career Grant.

Mr. Halim recently has been appointed as Music Professor and is the holder of the inaugural Sascha Gorodnitzki Faculty Chair in Piano Studies, Department of Music and Performing Arts at Steinhardt, New York University.