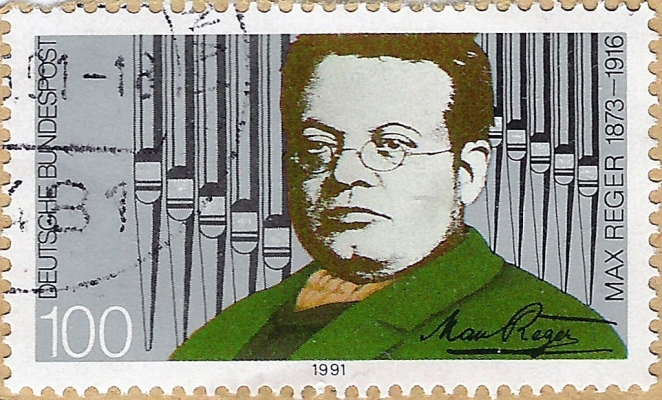 The UW and St. Mark's Cathedral co-sponsor a symposium on the music of German composer Max Reger Nov. 11 and 12.

Admission is by suggested donation. This concert is not a UW Music event; contact St. Mark’s for more details: 206.323.0300, or concerts@saintmarks.org.

Not a Notecard event. UW Music Major Performance Passes are valid for admission.

Jonathan Bernard earned Ph.D., M.Phil., and M.A. degrees at Yale University and an A.B. degree at Harvard College.  He  taught at Amherst College and Yale University before joining the University of Washington School of Music faculty in 1987. He has held the rank of Professor of Music (Theory) since 1993, and was a Ruth Sutton Waters Endowed Professor  from 2002 to 2005.

Bernard's research interests center on the theory and analysis of music of the past 100 years, particularly since 1945 and including popular music, and on the history of theory from the 18th century to the present.  He is the author of The Music of Edgard Varèse (Yale University Press); the editor of Elliott Carter: Collected Essays and Lectures, 1937-1995 (University of Rochester Press); and a contributing editor to Music Theory in Concept and Practice (University of Rochester Press).  More recently, he edited and contributed to Joël-François Durand in the Mirror Land, a book of essays and music by and about Professor Durand, his colleague in Composition, which was published in 2005 by the University of Washington Press.  Books currently in preparation include a collection of interconnected essays on the music of Elliott Carter and a similar collection on the music of Gyorgy Ligeti.

Bernard’s articles on such topics as 18th-century French and German music theory, the music of Varèse, Bartók, Stravinsky, Carter, Messiaen, Ligeti, Feldman, and Zappa, minimalist aesthetics and analysis, pitch-spatial theory and analysis, recent American tonal music, the history of 20th-century compositional practice, and rock & roll of the 1960s have appeared in the Journal of Music Theory, Music Theory Spectrum, Music Analysis, Music Perception, Perspectives of New Music, American Music, Musical Quarterly, Contemporary Music Review, Twentieth-Century Music, and the Journal of the Society for American Music, among others, as well as in edited collections from Faber & Faber, University of Rochester Press, Cambridge University Press, Schott, Routledge, Greenwood Press, Garland Publishing, Boydell Press, Ashgate Publishing, and Boosey & Hawkes, among others.  Recent and imminent publications include:  “Le Sacre, Analyzed,” in Avatar of Modernity: The Rite of Spring Reconsidered (Boosey & Hawkes, 2013); “Minimalism and Pop: Influence, Reaction, Consequences,” in The Ashgate Research Companion to Minimalist and Post-Minimalist Music (Ashgate Publishing, 2013); “Bartók and Traditional Form Description: Some Issues Arising from the Middle and Late String Quartets,” in The String Quartets of Béla Bartók: Tradition and Legacy in Analytical Perspective (Oxford University Press, 2014); "'Octatonicism,' the Octatonic Scale, and Large-Scale Structure in Joan Tower's Silver Ladders," in a collection of analytical essays on music by 20th-century women composers, due from Oxford University Press in 2015.

Bernard has served terms as Editor of Music Theory Spectrum and as Chair of the Publications Committee of the Society for Music Theory.  He is currently a member of the editorial board of Perspectives of New Music, and has recently completed a term on the Steering Committee of the Society for Minimalist Music, of which he is also a founding member.  He has received research support from the American Council of Learned Societies, the National Endowment for the Humanities, the Amphion Foundation, the Paul Sacher Stiftung, and the Graduate School Fund and Royalty Research Fund at the University of Washington.

Rumph's book Beethoven After Napoleon: Political Romanticism in the Late Works (University of California Press, 2004) offers a political interpretation of late Beethoven illuminated by the writings of the German Romantics. His second book, Mozart and Enlightenment Semiotics (University of California Press, 2011), pioneers a "historically-informed" semiotics of music, based upon eighteenth-century sign and language theory. He is currently writing a book on Gabriel Fauré's song cycles.

Christopher Anderson is Associate Professor of Sacred Music at Southern Methodist University, Dallas, where he teaches graduate courses in history and theory in the Perkins School of Theology and the Meadows School of the Arts. He joined the SMU faculty in fall 2006, having taught previously in the Music Department of the University of North Dakota, Grand Forks.

Anderson is a scholar and organist whose work has centered on early musical modernism, modern German history and philosophy, the organ’s position in Western culture, and the composer Max Reger. He has written extensively on Reger and his music in two books, Max Reger and Karl Straube: Perspectives on an Organ Performing Tradition (Ashgate 2003) and Selected Writings of Max Reger (Routledge 2006). In addition, his many essays appear in German- and English-language journals. His seminal 2003 study of Reger and Straube is the first extensive survey of any aspect of Reger in English and was the winner of the prestigious 2006 Max Miller Book Award, given by The Organ Library of the American Guild of Organists via the Boston University School of Theology. Recently, Anderson translated into English the second volume of Jon Laukvik’s Historical Performance Practice in Organ Playing (Carus, 2010) and edited the first complete survey of organ music in the twentieth century, Twentieth-Century Organ Music (Routledge 2011). Currently he is writing the first biography of Karl Straube, the early twentieth-century Leipzig organist and Thomaskantor whose work is central to the organ and church music cultures of modernist Germany.

Anderson is active in the Organ Historical Society and serves as an advisor for its publishing program. His mentors have included Peter Williams, Ludger Lohmann and Robert T. Anderson.

Wyatt Smith, a native of Rapid City, South Dakota, is currently a doctoral student at the University of Washington in Seattle, where he studies organ performance with Dr. Carole Terry. He is a member of the American Guild of Organists, through which he has served on multiple committees, both at the national and local level for the last several years. He also holds the Colleague and Service Playing Certificates from the AGO.

Wyatt was the winner of the 2011 AGO/Quimby Regional Competition for Young Organists (North Central Region) held in Des Moines, Iowa. He was also among the winners of the 2011 USD Concerto Competition. His performances have been heard on several episodes of American Public Media’s Pipedreams, along with South Dakota Public Radio and Television.