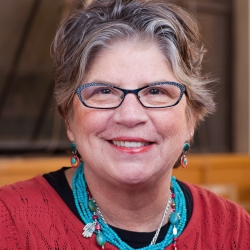 Fall Quarter Ethnomusicology Visiting Artist Marisol Berríos-Miranda is joined by her students in a performance of music and dance from the Caribbean traditions, exploring the rhythms of salsa, plena, bomba, merengue, and rumba.

This class has served as an introduction  to Caribbean music for many of the students,  but even more importantly it has emphasized the importance of having a solid rhythmic foundation to be able to play any type of music. We concentrated on the basic 1-2-3-4 beats as the grounding pulse of Afro-Caribbean rhythm, “your purpose in life.” With that foundation  we explored the polyrhythmic characters of Afro-Caribbean styles including salsa, bomba, plena,

and calypso. We practiced singing and moving to every rhythm and melody, always steping to the 1-2-3-4 beat, and superimposing clave, conga pattern, güiro pattern, cowbell, bongos, cáscara, anticipated bass line, and piano montuno--playing simultaneously as many rhythms

as we could.  The arrangements we are playing tonight are simple, but the work that went into feeling and expressing the rhythm has been arduous!

Recorded in 1930 by Don Aspiazu and his Havana Casino Orchestra, this song helped launch the “rumba” craze in the United States (even though it is best described as son, not rumba).  It is possibly the most-quoted Cuban melody ever.

Cortijo y su Combo, with singer Ismael Rivera, created a sensation  in the 1950s by modernizing the Afro-Puerto Rican styles they had learned  growing up together  in the neighborhood of Santurce.   They helped bring new attention and prestige to the styles of bomba and plena, in particular, and broke racial barriers by performing in elegant hotels and on television.  We are performing this song with the frame drums, called panderos, traditionally used to play plena.

The Puerto Rican genre  of bomba is centered on the improvisational challenge between dancer and drummer. The dancer creates musical phrases  and accents with his or her movements (called piquetes), and the drum called primo or subidor must sound out those movements simultaneously. Two other drums, called buleadores, play a steady steady rhythm (this one is called sicá), along  with maraca,  cuá (two sticks played against  a small barrel), and call/response singing.  Notice how closely the primo player is watching the dancer, trying to anticipate her next move.

“Old Lady Walk a Mile and a Half.”  Trinidadian calypso, arranged  by Shannon Dudley and Caribbean Music and Dance Students

Although this is a traditional carnival song from Trinidad, we are playing an arrangement recorded  in the 1940s  by one of Trinidad’s greatest calypsonians, the Lord Kitchener (Aldwyn Roberts).  The lyrics say, “Old lady walk a mile and a half and she te-le-le,” which means she is walking with a swing in her hips to lighten her load and make the journey more fun. We’ll try to make the music swing, too.

This song was recorded by the legendary  Puerto Rican pianist Eddie Palmieri in 1962  with his band “La Perfecta.”  The lyrics exhort listeners  to dance  the pachanga, a dance  style that was popular in the early 1960s in New York City.  It is a study  in groove—two chords that never change the whole way through,  and a simple coro (chorus)—with the horn lines, breaks, and improvisations providing variety.

Gracias/ Thank you to:

Professor Shannon Dudley, for helping us with all the rhythms and instruments, specifically conga drums, and for being in every single class helping out with whatever was necessary. This class was not possible without you.

Gabriel Ortiz for teaching us bomba drumming and singing

José Fusté for teaching us bomba drumming and singing

And to my dear students  for making this a most rewarding musical experience.

Marisol has a PhD in ethnomusicology, but her first education came from a childhood in her native Puerto Rico, where she was soaked in music. "I studied music academically, but the way I learned music - who sings well, what had a good rhythm - was sitting down and listening with my dad." She also credits her mother, Juanita Miranda-Berrios. "She is the encyclopedia. She knows everything about Latin rhythm and dance."

Marisol teaches in layers, one rhythm at a time. She recently completed a residency at Alki Elementary School, teaching Latin rhythms to 120 fourth and fifth graders, which culminated in a concert. "They were the best!" she says, "curious, engaged, respectful. 30 years ago, when I came to the United States and was teaching people the Clave, it was almost impossible for them to get it: the side-to-side movements that accompany the rhythm can be difficult. But these kids nowadays hear more Latin and African rhythms at a younger age, they are more exposed to world rhythms." (Clave is the Spanish word for keystone or key. A Clave rhythm is a repeated five-note pattern.)

"The interlocking rhythms and call-response singing of Latin Caribbean music have a special power to generate participation," says Marisol, who used the fellowship to share her knowledge and experience with Eckstein Middle School, taking young jazz musicians to a deeper level of Afro-Caribbean playing. She is also deeply involved with the Seattle Fandango project. "People need to get back to playing music themselves," she says, "all the generations: mamas with babies, teenagers, elders. We are community building through music making. And that's amazing."

As co-curator of the Smithsonian Traveling Exhibit American Sabor, Marisol developed, in collaboration with Shannon Dudley and Michelle Habell-Pallán, a classroom curriculum, educator resources, and guided listening programs. The exhibit highlights the contributions of Latinos to popular music in the United States since World War II.

"One of my purposes is to share the joy and happiness of music and dancing," says Marisol. "This is my way to free the creative impulses in our children, so they have such intense joy in the learning and doing." Quoting Nietzsche, she says, "We should consider every day lost on which we have not danced at least once."