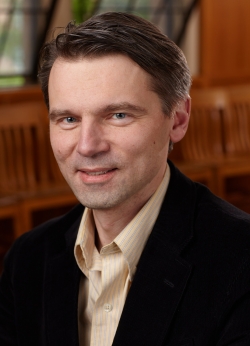 Dr. Vaičekonis earned degrees from the National Čiurlionis School of Art in Vilnius, the Lithuanian Academy of Music, the Mozarteum Academy in Salzburg, Bowling Green State University, Ohio, and the University of Washington. His mentors include celebrated European and American artists and teachers Robin McCabe, Jerome Rose, Jurgis Karnavičius, Mūza Rubackytė and Gediminas Kviklys. He performed in the master classes of Karl-Heinz Kämmerling and Christian Zacharias. He was an artist in residence at the University of Washington School of Music.

Dr. Vaičekonis received a Gerberding Fellowship at the University of Washington. His dissertation, "The Forest for the Trees:  Beethoven piano sonatas as integrated cycles,” was published in Germany in 2009. He has performed at Benaroya's Nordstrom Recital Hall, Meany Hall, on “Live by George” at KING FM, “The Beat” at KUOW public radio, Bumbershoot, UW Summer Arts Festival, Franciscan Nights Festival in Ohio, and is a frequent performer in SPU's faculty concert series.

Dr. Vaičekonis has performed with the Vilnius String Quartet and with distinguished artists such as violinists Alexander Velinzon, Ilkka Talvi,  and Marjorie Kransberg-Talvi, flutists Edmund Paul Davies and Magali Mosnier-Karoui, clarinetist Sean Osborn, and the Chamber Dance Company. He also performs extensively with his wife, Asta, as a piano duo. Their recent project, “Music for Two Pianos by Living Composers of Israel, U.S., and Lithuania,” was presented in the schools of Israel - Jerusalem Academy of Music, Beer Sheva Conservatory, and Levinsky Pedagogical College in Tel Aviv.

He served as a judge in ENKOR, MTNA, Francis Walton, and other competitions in the Pacific Northwest, as well as a coach for the Puget Sound Chamber Music Workshops in the Seattle Pacific University. He taught master classes in the Music Academy at the Vytautas Magnus University in Kaunas, Lithuania, and in the Jerusalem Academy of Music and Dance, Israel. His students are successfully participating in festivals and competitions nationwide.

In 2014, Dr. Vaičekonis presented a lecture on and recital of legendary American pianist, composer, and pedagogue Leopold Godowsky in his birthplace in Lithuania. His next project is a lecture-recital and CD recording of the last three Beethoven piano sonatas.