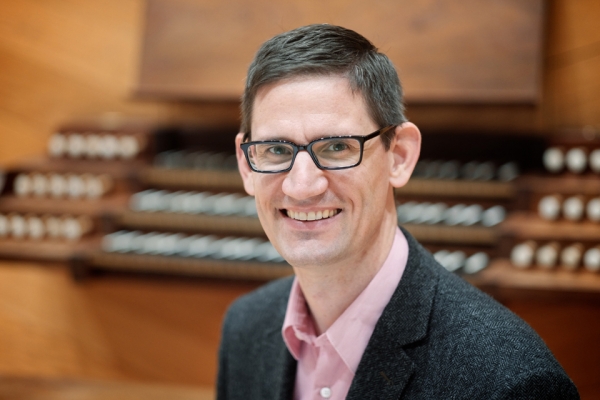 Professor of Organ at the University of North Carolina School of the Arts performs a recital on the UW’s Littlefield Organ.

Timothy Olsen teaches a joint studio of high school, undergraduate and graduate organ majors as the Kenan Professor of Organ at the University of North Carolina School of the Arts and Associate Professor of Organ at Salem College in Winston-Salem, NC. Dr. Olsen also serves as Cantor at Augsburg Lutheran Church in Winston-Salem, where he oversees the music program directing the adult choirs, playing for services, and directing a music staff of a Director of Youth Music and Handbells and a music intern.

Dr. Olsen is the first-prize winner of the 2002 National Young Artists Competition in Organ Performance sponsored by the American Guild of Organists. He has recorded a compact disc on the NAXOS label, and has been featured multiple times on Minnesota Public Radio’s Pipedreams.

A native of Frost, Minnesota, Dr. Olsen began his study of the organ at the age of 13 with Sandra Krumholz of Fairmont, MN, and went on to further study with Peter Nygaard at Concordia College in Moorhead, MN, where he received a Bachelor of Music degree in 1997. Dr. Olsen continued his study as a student of David Higgs at the Eastman School of Music in Rochester, New York, where he earned the Doctor of Musical Arts and Master of Music Degrees in Organ Performance and Literature as well as a Master of Arts Degree in Music Theory Pedagogy. During his tenure at the Eastman School of Music, Dr. Olsen served as Professor Higgs’ teaching assistant, a teaching assistant in the theory department, and as a faculty member of the Eastman Community Education Division. He was for four years the Wanda L. Bass Chair of Organ at Oklahoma City University, and also has served on the faculty of Ithaca College, and as sabbatical replacement at Binghamton University and Cornell University.