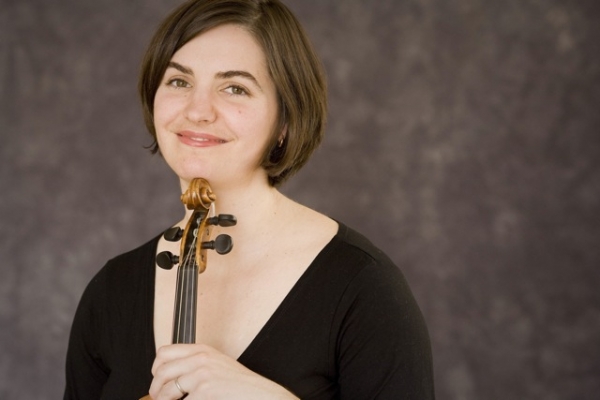 Violist Vijay Chalasani is a versatile and commanding artist known for his imaginative and passionate performances. Equally at home on both modern and historical violas, Chalasani was featured as a soloist in performances ranging from the Walton Viola Concerto, Mozart Sinfonia Concertante, and Hoffmeister Viola Concerto with modern orchestras, to Bach’s 6th Brandenburg concerto, the Telemann Viola Concerto, and the Telemann Concerto for Two Violettas with period orchestras. An avid advocate for contemporary music, Chalasani was the soloist in the US premiere of Vinko Globokar’s chamber-theater piece “Blinde Zeit” with members of the Callithumpian Consort. He has also collaborated with composer Brian Ferneyhough, composer-violist Garth Knox, pianist Stephen Drury, Inverted Space Ensemble, and the Guerrilla Composers Guild, and actively commissions new works for the viola. Chalasani performs frequently on period instruments with ensembles such as the American Bach Soloists, Pacific MusicWorks, Early Music Vancouver, and the Albany Consort, as well as in chamber music performances of works from the classical and romantic eras on original instruments. Chalasani currently studies in the Doctor of Musical Arts program at the University of Washington, where he studies viola with Melia Watras; as a Teaching Assistant at the UW, he works with the Modern Music Ensemble and Baroque Ensemble, and teaches Chamber Music Lab and String Techniques. Chalasani’s graduate studies were at the San Francisco Conservatory of Music, where he studied with Don Ehrlich (modern viola), Elizabeth Blumenstock (baroque viola), and the late Mark Sokol (chamber music). His undergraduate studies were at CSU Sacramento, where he studied viola with Anna Kruger, chamber music with Ian Swensen and Andrew Luchansky, and pedagogy with Judy Bossuat. In addition to the concert stage, Chalasani often performs in less traditional venues such as bars, cafes, and house concerts, and has collaborated in cross-genre performances with a wide range of artists including rock band Third Eye Blind, hip-hop orchestra Jazz Mafia, and indie-folk group Americana Orchestra.

Tekla Cunningham, baroque violin, leads an active and varied musical life. At home in Seattle, she is Orchestra Director and concertmaster of Pacific MusicWorks, and is an artist-in-residence at the University of Washington. She founded and directs the Whidbey Island Music Festival, now entering its twelfth season, producing and presenting vibrant period-instrument performances of repertoire ranging from Monteverdi to Stephen Foster, and plays regularly as concertmaster and principal player with the American Bach Soloists in California. Her concert performances have earned glowing praise from reviewers and have been described as "ravishingly beautiful" and "stellar".  She has appeared as concertmaster/leader or soloist with the American Bach Soloists, Baroque Chamber Orchestra of Colorado, Seattle Baroque Orchestra, Musica Angelica (Los Angeles) and Pacific Baroque Orchestra and has played with Apollo’s Fire, Los Angeles Opera, Philharmonia Baroque Orchestra, and at the Berkeley, Carmel Bach, San Luis Obispo Mozart Festival, Indianapolis, Oregon Bach, Vancouver Bach, Savannah, Bloomington Festivals and Valley of the Moon festivals. Tekla received her musical training at Johns Hopkins University and Peabody Conservatory (where she studied History and German Literature in addition to violin), Hochschule für Musik und Darstellende Kunst in Vienna, Austria, and at the San Francisco Conservatory of Music. Tekla plays on a violin made by Sanctus Seraphin in Venice, 1746.

Corentin Pokorny is a baroque and modern violinist based in Seattle, Washington. He has been a member of many chamber ensembles, most recently, the Daana String Quartet, the SCREE! Ensemble, and the Rocoempo Trio with his two brothers. He has also played with Pacific MusicWorks among other orchestras. He was born and raised in France, where he studied violin, piano, and voice from a very young age. He studied in the Boulogne Conservatory of Music, followed by several years in the Aulnay-Sous-Bois Conservatory of Music, under the teaching of violinist José Alvarez, former principal second of the Paris Opera, and assistant violin teacher at the Conservatoire National Supérieur de Musique in Paris. After moving to the United States in 2008, Corentin eagerly joined the musical scene of the Seattle area, performing three years in the Seattle Youth Symphony, as well as taking part in the chamber music program of the Seattle Conservatory of Music. He also performed many times, as soloist and as part of ensembles, in concert series at the Daniels Recital Hall in downtown Seattle.

Romaric Pokorny, viola, is an avid chamber music player. Based out of Seattle, he has been a member in several chamber music ensembles in the Puget Sound area, most notably the Oceana String Quartet, SCREE! String Quintet, and especially the Rocoempo Trio, alongside his brothers. He also enjoys performing with Seattle’s Pacific MusicWorks, the Seattle Symphony Orchestra, SeattleMusic, Pacific Northwest Ballet, and various other ensembles. A native of France, he received his early musical training there, studying violin, piano, composition and music theory at the Conservatoire a Rayonnement Regional de Boulogne-Billancourt and later at the Conservatoire d'Aulnay-sous-Bois under violinist Jose Alvarez, and earning a Diplome Superieur de Solfege. After moving to the United States, he finished his studies with a degree in Viola Performance from the University of Washington. His interests also grew to include some experience in pipe organ building and restoration, working for an organ supply and restoration company for several years, and is currently working with The Harpsichord Shop. His other current music interests include genre-crossing musical exploration (with the Rocoempo Trio) and the promotion of classical and early music performances to include a broader audience, with Early Music Underground.

Janet See is one of today’s outstanding performers on baroque and classical flute. For over 35 years she has performed as soloist, in chamber music, and in orchestras throughout Europe and North America. In North America, Janet plays principal flute with Philharmonia Baroque, Pacific MusicWorks, Seattle Baroque, and Portland Baroque Orchestras. In London, Ms. See played principal flute for Sir John Eliot Gardiner’s baroque and classical orchestras and with those groups recorded the complete Mozart Operas, Beethoven Symphonies, and numerous other discs. Janet is an active and enthusiastic teacher of early flutes and also of interpreting the nuance and language of baroque and classical music on modern flute. She is director of the popular Seattle Baroque Flute Summer Workshop, which attracts students from all parts of the United States. Ms. See is a teacher of the FM Alexander Technique, having trained in London with Walter Carrington. Visit her website: janetsee.com

Nathan Whittaker, violoncello, enjoys a unique and diverse career as a concert soloist, chamber musician, recitalist, teacher, and historical cello specialist. He plays regularly with the Seattle Baroque Orchestra, Pacific Baroque Orchestra, Portland Baroque Orchestra, and is a founding member of the Op. 20 String Quartet. Recent concert appearances have included the Indianapolis Early Music Festival, Vancouver Early Music Festival, and Pacific Baroque Festival (Victoria, B.C.), as well as other concert stops ranging from Seattle to New York to Dubai. He also composed and recorded an original score for the Emmy nominated documentary "When Seattle Invented the Future". He can be heard on recordings by ATMA, Musique and Harmonia and broadcasts by NPR, CBC, and KING FM. An active pedagogue, he maintains a dynamic private studio and is faculty at the Cornish College of the Arts and the founder and director of the Seattle Chamber Music Coaching Sessions (SCMCS). Along with his busy performance and teaching schedule, he completed a Doctorate of Musical Arts from the University of Washington in 2012. Dr. Whittaker also holds degrees from Indiana University.