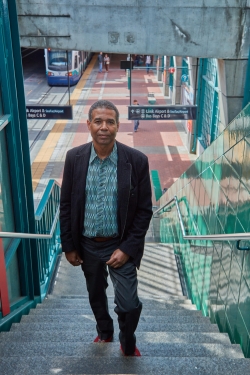 Noted Northwest jazz pianist Marc Seales, professor in the UW’s Jazz Studies program, is joined by Thomas Collier, vibes, in a program of original tunes and arrangements of popular standards, including the Beatles' "Across the Universe" and Burt Bacharach's "Anyone Who Had a Heart."

Critics have praised Seales variously for his "meaty piano solos," and "blues inflected, Hancock-inspired modernism." Winner of numerous Earshot awards (Instrumentalist of the Year in 1999 and Acoustic Jazz Group in 2000 and 2001; Jazz Hall of Fame, 2009), Seales is today promoting jazz awareness and molding young talents as a Professor of Music at the University of Washington, where he is a professor in the Jazz Studies Program. He teaches an array of courses, including History of Jazz, Jazz Piano, and Beginning and Advanced Improvisation, as well as leading various workshops and ensembles.

Director of percussion studies at the University of Washington School of Music from 1980 until his retirement from the UW in June 2016, professor Tom Collier has performed and recorded with many important classical, jazz, and popular artists, in addition to recording and performing with his own jazz group. He is a veteran of more than 50 years in music — his first public appearance was at age five, on xylophone, and his first professional performances were made as a nine-year-old marimba virtuoso.

Collier has released several albums as leader or co-leader beginning with Whistling Midgets with electric bassist Dan Dean for Inner City Records in 1981. Other albums include Illusion (1988, T.C. Records), Pacific Aire (1990, Nebula Records) and Mallet Jazz (2004, Origin Records). Collier and Dean's 2005 album, Duets on Origin Records, was nominated for "Album of the Year" by Earshot Magazine. An album of original compositions for vibraphone and marimba, Mallet Fantastique, was released in March, 2010 on the Origin Classical label. Another album for Origin Classical was released in 2012, Tom Collier Plays Haydn, Mozart, Telemann and Others, and featured Collier playing compositions for two violins re-arranged for vibraphone and marimba. In 2014, Collier And Dean released their third album, Sleek Buick, on Origin Records featuring several jazz luminaries including drummers Alex Acuña and Ted Poor, keyboardist Don Grusin, saxophonists Ernie Watts and Gary Herbig and trumpeter Allen Vizzutti.