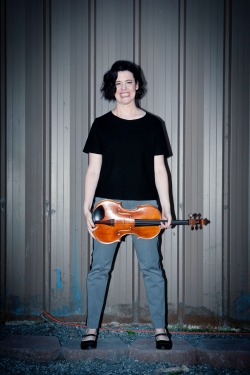 Faculty violist Melia Watras performs selections from 26, her newly released CD on the Sono Luminus label. The program includes a video presentation and commentary by the artist.

Hailed by Gramophone as “an artist of commanding and poetic personality” and described as “staggeringly virtuosic” by The Strad, violist Melia Watras (meliawatras.com) has distinguished herself as one of her instrument’s leading voices. As a soloist, chamber musician and recording artist, Watras has championed the works of living composers throughout her career, while appearing at prestigious venues such as Carnegie Hall, Weill Recital Hall, and Alice Tully Hall. Recent and upcoming highlights include the release of her fourth solo album Ispirare, which features the world premiere recording of Pulitzer Prize-winner Shulamit Ran’s Perfect Storm (a piece that was written for Watras); and video projects with violist Garth Knox (performing with Knox on his duos, Viola Spaces for Two) and video artist Ha Na Lee.

Watras’s discography has received considerable attention and praise from the media. In the first week of its release, Ispirare was named album of the week by both WQXR-New York’s Q2 Music and KING-Seattle’s Second Inversion. Short Stories was a Seattle Times Critics’ Pick, with the newspaper marveling at her “velocity that seems beyond the reach of human fingers.” Of her debut solo CD (Viola Solo), Strings remarked, “Watras is a young player in possession of stunning virtuosic talent and deserving of the growing acclaim,” and called her second release (Prestidigitation) “astounding and both challenging and addictive to listen to.” For Viola Solo, Watras adapted John Corigliano’s Fancy on a Bach Air for viola. Her edition of this work is published by G. Schirmer, Inc.

With the Corigliano Quartet, Watras has concertized and recorded extensively. Described as “musicians who seem to say ‘Listen to this!’” by the New York Times, the ensemble’s Naxos label CD was named one of the Ten Best Classical CDs of the Year by The New Yorker and prompted Gramophone to proclaim, “the unbridled force and full-metal virtuosity that the Corigliano Quartet unleash on this music is astounding.” The quartet’s awards include the Grand Prize at the Fischoff Competition and the ASCAP/CMA Award for Adventurous Programming. As a member of Open End, Watras has performed in France, Denmark and the United States, and has recorded for Albany Records. Watras’s exploration of improvisation has led her to collaborating with jazz innovators Cuong Vu and Ted Poor, and to writing her own compositions. Her violin/viola duo Liquid Voices recently had its European premiere, and 2015-16 will see the world premiere of three of her works.

A versatile performer, Watras has enjoyed collaborations with dance and theater. She appeared as violist/dancer in the premiere of Kathryn Sullivan's At Home, at the Merce Cunningham Studio in New York City. Music from her Viola Solo CD was featured in director Sheila Daniels’s production of Crime and Punishment at Intiman Theatre, and she worked as music consultant for Braden Abraham’s production of Opus at Seattle Repertory Theatre.

Melia Watras was born in Honolulu, Hawaii and began her musical studies on the piano at age 5. Soon after, she turned to the viola and made her debut at 16, soloing with the Dayton Philharmonic Orchestra. Her formal studies took her to Indiana University, where she studied with Abraham Skernick and Atar Arad, earning Bachelor’s and Master’s degrees and the prestigious Performer’s Certificate. While at Indiana, Watras began her teaching career as Professor Arad’s Associate Instructor, and was a member of the faculty as a Visiting Lecturer. She went on to study chamber music at the Juilliard School while serving as a teaching assistant to the Juilliard String Quartet.

Watras serves as Associate Professor of Viola and chair of Strings at the University of Washington, where she currently holds the Adelaide D. Currie Cole Endowed Professorship and was previously awarded the Donald E. Petersen Endowed Fellowship and the Royalty Research Fund. Watras has given viola and chamber music classes at schools such as Indiana University, Cleveland Institute of Music, Strasbourg Conservatoire (France), and Chosun University (South Korea). She has twice returned to her alma mater, Indiana, to teach as a guest professor. Watras currently resides in Seattle with her husband, Pacific Northwest Ballet concertmaster Michael Jinsoo Lim. She plays a viola made by Samuel Zygmuntowicz.