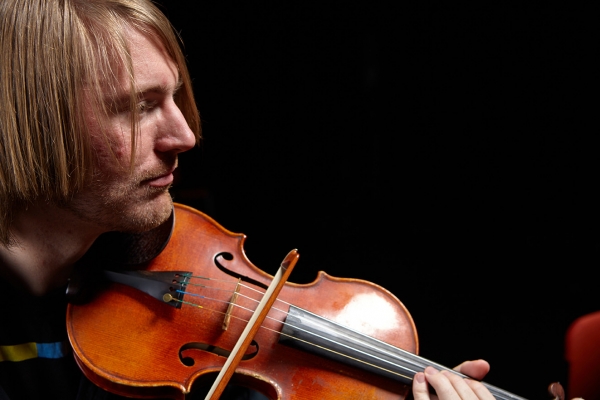 Artist in residence Luke Fitzpatrick performs The Complete Works for Adapted Viola and Intoning Voice by 20th century American composer Harry Partch. The program consists of the entire 17 Lyrics by Li Po as well as the Two Psalms and The Potion Scene (from Shakespeare's Romeo and Juliet).  The scores for both Two Psalms and The Potion Scene were recently rediscovered by Charles Corey, director of the Harry Partch Instrumentarium at UW.

Luke Fitzpatrick is a violinist, composer and improvisor.  He is a founding member and artistic director of Inverted Space, a Seattle-based new music collective.  Recent solo performances include Earle Brown’s Centering with Inverted Space, Alfred Schnittke’s Moz-Art with the University of Washington Chamber Orchestra and Brian Ferneyhough’s Intermedio alla ciaccona in the presence of the composer.  His February 2016 performance of Steve Reich’s Violin Phase was performed with a live electronics system developed by Marcin Pączkowski.  Additionally, he has performed with Deltron 3030, The Penderecki String Quartet, inauthentica, The Parnassus Project, The Moth, The Argento Chamber Ensemble and the California EAR Unit.  His world premiere recording of Vera Ivanova's Quiet Light for solo violin was released on Ablaze Records in 2011.  Luke holds degrees from The University of Washington (DMA), California Institute of the Arts (MFA) and the University of Missouri-Kansas City (BM).  His principal teachers include Benny Kim, Mark Menzies, Lorenz Gamma and Ron Patterson.  He is currently Artist-in-Residence at the University of Washington.