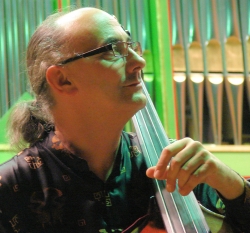 Catalin Rotaru of Arizona State University presents a master class and recital on May 20 and 21.

Note: Catalin Rotaru also presents a free recital on Sunday, May 21st at 2 pm in Brechemin Auditorium. More info on this event can be found here.

Catalin Rotaru, double bass, joined the School of Music at Arizona State University, in 2005. Mr. Rotaru is in demand as a performer and clinician throughout the world. He is a licentiate of the National University of Music from Bucharest, Romania and holds a Master’s degree in music performance from the University of Illinois at Urbana-Champaign. Previously he was Associate Professor of Double Bass and Jazz Studies at the University of Wisconsin-Stevens Point, taught at Millikin University, and at the University of Illinois. He has performed both solo classical and jazz bass throughout Europe, the United States, South America and Asia. He served as associate principal bass in the Romanian National Radio Orchestra, principal bass in the Sibiu Philharmonic Orchestra, Virtuosi Chamber Orchestra of Bucharest, Danville Symphony Orchestra, Champaign-Urbana Symphony Orchestra, associate principal and principal bass in Sinfonia Da Camera, and principal bass of the Orchestra Sinfonica Europea. Mr. Rotaru collaborates frequently with the Phoenix Symphony Orchestra and Arizona Opera and performs extensively as soloist in recitals or with symphony orchestras throughout the United States and abroad, giving numerous clinics and master classes. He received the second prize at the 1997 International Society of Bassists Solo Division Competition and the Jury's Special Award for the best performance of the required piece at that competition. He was the winner of the Krannert Center for the Performing Arts Debut Recital Award in 1997, and received the Central Illinois Chapter of the National Society of Arts and Letters Award in 1996. Mr. Rotaru recorded his debut solo CD, entitled Bass*ic Cello Notes released by Summit Records in March 2007 and recently recorded his second album in Sao Paulo, Brazil. For the last several years, Professor Rotaru has been a frequent solo performer and gave master classes at many prestigious festivals in United States, Asia, Europe and South America. Mr. Rotaru performs on a modern double bass made in Italy by Luciano Golia and a bow made by Marco Pasquino.