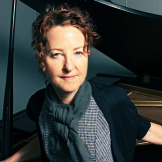 For pianist, composer and Guggenheim fellow Myra Melford, the personal and the poetic have always been intimately and deeply connected. Raised outside Chicago in a house designed by the renowned architect Frank Lloyd Wright, Melford grew up literally surrounded by art. Where most of us find the beauty in our childhood homes through the memories and associations we make within its four walls, Melford saw early on that aesthetic expression could both be built from and be a structure for profound emotions.

Over the course of a career spanning more than two decades, Melford has taken that lesson to heart, crafting a singular sound world that harmonizes the intricate and the expressive, the meditative and the assertive, the cerebral and the playful. Drawing inspiration from a vast spectrum of cultural and spiritual traditions and artistic disciplines, she has found a “spark of recognition” in sources as diverse as the writings of the 13th-century Persian poet Rumi and the Uruguayan journalist Eduardo Galeano; the wisdom of Zen Buddhism and the Huichol Indians of Mexico; and the music of mentors like Jaki Byard, Don Pullen, and Henry Threadgill.

Melford also currently is one-third of the collective Trio M with bassist Mark Dresser and drummer Matt Wilson; their most recent CD, The Guest House, was one of 2012’s most acclaimed releases. She also performs in the duo ::Dialogue:: with clarinetist Ben Goldberg and will release her first solo album in October 2013, a collection of work inspired by the paintings of the late visual artist Don Reich.

Melford’s musical evolution has long run in parallel with her spiritual search, a personal journey that has led her to Aikido, Siddha Yoga, and the wisdom traditions of the Huichol people of Mexico’s central highlands. Sonically, that quest is expressed via her wide-ranging palette, which expands from the piano to the harmonium and electronic keyboards or to amplifying barely audible sounds in the piano’s interior. Her playing can build from the blissful and lyrical to the intense and angular, with accents from Indian, African, Cuban and Middle Eastern musics or the cerebral abstraction of European and American jazz and classical experimentalism.

While Melford’s music continually reaches toward a state of transcendence, it still remains deeply rooted in the blues traditions she heard growing up in the Chicago area. In 1978, she first encountered violinist Leroy Jenkins, her introduction to the AACM, whose boundary-free, adventurous approach to jazz remains an influence. She would go on to study with Jenkins, together forming the collective trio Equal Interest with multi­reedist Joseph Jarman in 1997.

Melford moved to the east coast in 1982 and began performing in New York City’s thriving Downtown scene, making her recorded debut as a leader in 1990; she has since released more than twenty albums as a leader or co-leader and appeared on more than 40 releases as a side-person. In 2000, she spent a year in North India on a Fulbright scholarship, immersing herself in the region’s classical, devotional, and folk music. Melford relocated to the west coast in 2004, joining the faculty of the University of California, Berkeley as an associate professor of contemporary improvised music. There, she engages students in the theory and practice of improvisation, employing diverse creative strategies.

Her work has earned Melford some of the highest accolades in her field. In 2013 alone, she was named a Guggenheim Fellow and received the Doris Duke Charitable Foundation’s Performing Artist Award and a Doris Duke Residency to Build Demand for the Arts for her efforts to re-imagine the jazz program at San Francisco’s Yerba Buena Center for the Arts. She was also the winner of the 2012 Alpert Award in the Arts for Music. She has been honored numerous times in DownBeat’s Critics Poll since 1991 and was nominated by the Jazz Journalists Association as Pianist of the Year in 2008 and 2009 and Composer of the Year in 2004. 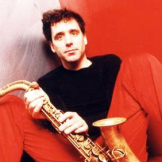 Andrew D'Angelo's charismatic presence and iconoclastic musical ambition have been well-established over the course of his twenty year plus career and his key roles in bands like Human Feel, the Matt Wilson Quartet and Tyft. His dedication to pushing his limits and his willingness to delve into new musical areas have been powerful inspirations to his peers and to a new generation of improvisers. His forceful tone and aggressive improvisational style have made him one of the most influential alto saxophonists of his time.

Andrew D'Angelo was raised in Seattle, where he forged powerful musical and personal relationships with fellow young musicians Chris Speed and Jim Black before moving to New York City in 1986. He reconnected with Speed and Black in Boston, where they formed Human Feel with guitarist Kurt Rosenwinkel.

Human Feel would prove to be one of the central incubators of new jazz for the 1990's. When the band moved to Brooklyn in the early 1990's, they were rapidly absorbed into the blossoming downtown music scene, becoming sidemen of choice for many world-renowned artists. D'Angelo joined bands and made records with Erik Friedlander, Bobby Previte, Jamie Saft/Cuong Vu and would forge another long-lasting musical relationship with drummer Matt Wilson.