Come learn more about 2019’s Summer Chamber Institute, a week-long seminar wherein amateur adult and semi-pro musicians are placed into chamber groups and coached by Thorsteinsdóttir and UW Music Strings Chair Melia Watras, and how you can get involved. The seminar offers the opportunity for participants to not only collaborate with other like-minded musicians in the Seattle arts community, but with world-class professionals like Kenney and Jokubaviciute.

Concert is FREE, but registration is required. Reception to follow. 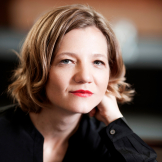 Lithuanian pianist Ieva Jokubaviciute’s intricately crafted performances and ability to communicate the essential substance of a work has led critics to describe her as possessing ‘razor-sharp intelligence and wit' (The Washington Post) and as ‘an artist of commanding technique, refined temperament and persuasive insight’ (The New York Times). In 2006, she was honored as a recipient of a Borletti-Buitoni Trust Fellowship.

Labor Records released Ieva’s debut recording in 2010 to international acclaim, which resulted in recitals in New York, Chicago, Philadelphia, Baltimore, DC, Vilnius, and Toulouse. Her latest recording: Returning Paths: solo piano works by Janacek and Sukwas released in 2014. Over the last seasons, she performed concerti with the Chicago Symphony Orchestra, with the American Youth Philharmonic in Washington, DC, and with orchestras in Rio de Janeiro, Brazil and in Montevideo, Uruguay. Her piano trio—Trio Cavatina—won the 2009 Naumburg International Chamber Music Competition and toured nationally from 2005-2015. In the fall of 2016, Ieva began a collaboration with the violinist Midori Goto, with recitals in Columbia, Peru, Mexico, Japan, Canada, and throughout Europe.

Earning degrees from the Curtis Institute of Music and from Mannes College of Music, her principal teachers have been Seymour Lipkin and Richard Goode.  In the fall of 2015, Ieva began her tenure as Assistant Professor, Piano at Shenandoah Conservatory in Winchester, VA. 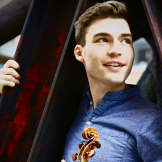 The recipient of a 2016 Avery Fisher Career Grant, violinist Alexi Kenney has been named "a talent to watch" by the New York Times, which also noted his "architect's eye for structure and space and a tone that ranges from the achingly fragile to full-bodied robustness.” His win at the 2013 Concert Artists Guild Competition at the age of nineteen led to a critically acclaimed Carnegie Hall debut recital at Weill Hall.

Highlights of Alexi's 2017-18 season included debuts with the Detroit, Columbus, California, and Amarillo symphonies, return engagements with the Santa Fe Symphony and the Las Vegas Philharmonic, and recitals with pianist Renana Gutman on Carnegie Hall's 'Distinctive Debuts' series, at the Phillips Collection in Washington D.C., and at Lee University (TN) and the Green Music Center at Sonoma State University (CA). Alexi has appeared as soloist with the Indianapolis, Jacksonville, Portland, Riverside, Santa Fe, and Tulare County symphonies, the Staatstheater Orchestra of Cottbus, Germany, and A Far Cry, and in recital at Caramoor, the Isabella Stewart Gardner Museum and Jordan Hall in Boston, and at Lincoln Center's Mostly Mozart Festival. He has been profiled by Strings magazine and the New York Times, written for The Strad, and has been featured on Performance Today, WQXR-NY’s Young Artists Showcase, WFMT-Chicago, and NPR’s From the Top.

Chamber music continues to be a main focus of Alexi’s life, touring with Musicians from Marlboro and Musicians from Ravinia’s Steans Institute and regularly performing at festivals including ChamberFest Cleveland, Festival Napa Valley, the Lake Champlain Chamber Music Festival, the Marlboro Music Festival, Music@Menlo, Open Chamber Music at Prussia Cove (UK), Ravinia, and Yellow Barn. He has collaborated with artists including Pamela Frank, Miriam Fried, Steven Isserlis, Kim Kashkashian, Gidon Kremer, and Christian Tetzlaff and is a new member of the Chamber Music Society of Lincoln Center's CMS 2 program beginning in the 2018-19 season.

Born in Palo Alto, California in 1994, Alexi holds a Bachelor of Music and an Artist Diploma from the New England Conservatory in Boston, where he studied with Donald Weilerstein and Miriam Fried. Previous teachers include Wei He, Jenny Rudin, and Natasha Fong. He plays on a violin made in London by Stefan-Peter Greiner in 2009.

Highlights of the 2017-2018 season include the US premiere of Betsy Jolas’ Wanderlied and the Hong Kong premiere of Sofia Gubaidulina’s Canticle of the Sun, as well as recitals and chamber music appearances in New York City, San Francisco, Seattle, Glasgow, London and Reykjavík. In addition to collaborating with Daníel Bjarnason on his award-winning composition Bow to String, Sæunn enjoys working with composers of our time such as Páll Ragnar Pálsson, Halldór Smárason, Þuríður Jónsdóttir and Melia Watras.

An avid chamber musician, she has collaborated in performance with Itzhak Perlman, Mitsuko Uchida, Richard Goode and members of the Emerson, Guarneri and Cavani Quartets and has participated in numerous chamber music festivals, including Prussia Cove and Marlboro, with whom she has toured. Formerly Artist-in-Residence at Green Music Center’s Weill Hall in Sonoma as well as cellist of the Manhattan Piano Trio, she is currently cellist of the Seattle-based chamber music group, Frequency, and cellist, founding member, and co-Artistic Director of Decoda, The Affiliate Ensemble of Carnegie Hall.

Born in Reykjavik, Iceland, Sæunn serves on the faculty of the University of Washington in Seattle, teaching cello and chamber music. For more information, please visit www.saeunn.com