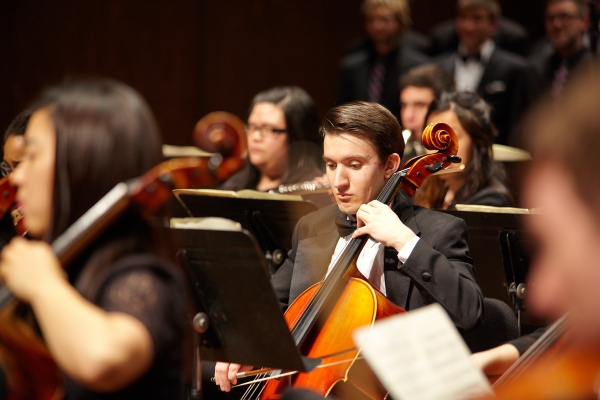 David Alexander Rahbee conducts the University Symphony in a program of music by Strauss and de Falla and performances by winners of the UW Concerto Competition: Elise Kim, flute; Edmund Hsu, viola; and Minsun Kim, piano.

Manuel de Falla: The Three-Cornered Hat, Suite No. 2
(100th anniversary of its premiere)

David Alexander Rahbee is currently Senior Artist in Residence at the University of Washington School of Music in Seattle, where he is Director of Orchestral Activities and Chair of Orchestral Conducting. He is Music Director and Conductor of the University of Washington Symphony Orchestra and founder of the UW Campus Philharmonia Orchestras. He is a recipient of the American-Austrian Foundation's 2003 Herbert von Karajan Fellowship for Young Conductors, the 2005 International Richard-Wagner-Verband Stipend, a fellowship the Acanthes Centre in Paris (2007), and is first prize winner in conducting from The American Prize national non-profit competitions in the performing arts for 2020.

Dr. Rahbee has appeared in concert with orchestras such as the Seattle Symphony, RTE National Symphony Orchestra of Ireland, Orchestre Philharmonique du Luxembourg, Kammerphilharmonie Berlin-Brandenburg, Guernsey Symphony Orchestra, Chattanooga Symphony, National Chamber Orchestra of Armenia, Orchestre de la Francophonie, Orchesterakademie der Bochumer Symphoniker, the Dresden Hochschule orchestra, Grand Harmonie, the Boston New Music Initiative, Seattle Modern Orchestra, Orquesta Sinfónica de Loja (Ecuador), Savaria Symphony Orchestra (Hungary), Cool Opera of Norway (members of the Stavanger Symphony), Schönbrunner Schloss Orchester (Vienna), the Whatcom Symphony Orchestra, the Kennett Symphony, and the Divertimento Ensemble of Milan. His collaborations with the Seattle Symphony include assistant conductor for the performance and recording of Ives’ Fourth Symphony, and as guest conductor for their Native Lands project and the North American premiere of Páll Ragnar Pallson's Quake with faculty cellist Sæunn Thorsteinsdóttir. He has collaborated with several prominent soloists such as Sarah Chang, Jon Kimura Parker, Yekwon Sunwoo, Glenn Dicterow and Jonathan Biss. He has been a guest rehearsal conductor for numerous young orchestras, such as the New England Conservatory Symphony Orchestra, The Symphony Orchestra of the Hall-Musco Conservatory of Music at Chapman University, and the Vienna University of Technology orchestra, the Boston Youth Symphony Orchestras, and Rhode Island Philharmonic Youth Orchestras. He has served on faculty of the Pierre Monteux School as Conducting Associate, has been resident conductor of the Atlantic Music Festival in Maine and guest conductor at the Hawaii Performing Arts Festival.

Dr. Rahbee was an assistant at the Vienna State opera from 2002-2010. As part of his fellowship and residency at the 2003 Salzburg Festival, Dr. Rahbee was assistant conductor of the International Attergau Institute Orchestra, where he worked with members of the Vienna Philharmonic. He has been selected to actively participate in masterclasses with prominent conductors such as Kurt Masur, Sir Colin Davis, Jorma Panula, Zdeněk Mácal, Peter Eötvös, Zoltán Peskó and Helmut Rilling, and counts Nikolaus Harnoncourt to be among his most influential mentors. From 1997-2001, David Rahbee was founder and conductor of the Fidelio Chamber Orchestra in Cambridge, Massachusetts.

Dr. Rahbeeʼs principal conducting teachers were Charles Bruck and Michael Jinbo at the Pierre Monteux School. He holds a Bachelor of Music degree in violin and composition from Indiana University, a Master of Music degree from the New England Conservatory in orchestral conducting, and a Doctorate of Musical Arts from the University of Montreal in orchestral conducting.  He has also participated in post-graduate conducting classes at the Universität für Musik und Darstellende Kunst, Vienna. His brass are published by Warwick Music, and his articles on the music of Mahler have appeared in journals of the International Gustav Mahler Gesellschaft, among others.

In addition to being awarded first prize in conducting from The American Prize for 2020, he was awarded 2nd place in 2019. He has also placed among winners for five consecutive years for The American Prize Vytautas Marijosius Memorial Award for Orchestral Programming, recognizing his programming with the UW Symphony and its affiliated ensembles for every season since he joined the faculty. The UWSO has also been a finalist in the category of orchestral performance in 2018, 2019 and 2020.