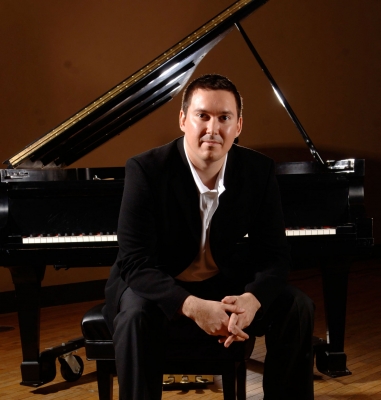 Bach: Prelude and Fugue in E-flat minor, Book I

Jeremy Samolesky, a native of Manitoba, Canada, serves as Professor of Piano and Head of Keyboard

Studies at Auburn University. Known for his passion for both solo and collaborative performances,

and teaches regularly at universities and conservatories around the globe, with recent appearances

throughout China, Hong Kong, Malaysia, Thailand, Colombia, Ecuador, Serbia, and Italy along with

hundreds of performances and masterclasses around the U.S. His debut solo CD on Centaur Records

was praised by critics as “brilliant,” “distinguished,” and “full of intensity and drama.” His subsequent

CD with clarinetist David Odom Max Reger: The Complete Works for Clarinet and Piano, was released by

Albany Records. Samolesky was selected as the first place winner of the 2016-17 American Prize in

Festival appearances include the Banff Centre for the Arts, the Orford Arts Centre (Quebec), the Agassiz

Radio (AL) and Columbus Public Radio (GA). Dr. Samolesky was also featured in a documentary on the

piano music of Sergei Prokofiev, produced by the Manitoba Television Network. Dedicated to the

performances of their works, having given recent premieres by composers such as David Maslanka,

prestigious scholarships and assistantships at renowned graduate music programs throughout the U.S.

For his achievements, he was awarded the “Excellence in Teaching” award from Auburn University. In

demand as an adjudicator, Samolesky regularly serves as a judge throughout the U.S. and

Collaborative Piano) and the Performer’s Certificate from the Eastman School of Music. He received his

studying with Dr. Delores Keahey. Samolesky spends his summers as Artist Faculty at the Orfeo