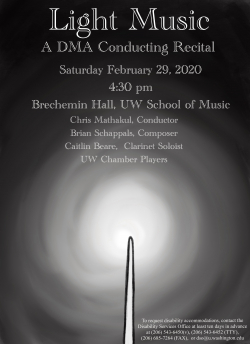 Originally from Maui, Hawai’i, Christopher V. Mathakul is in his second year as a Doctoral student in Wind Conducting at the University of Washington. Prior to his doctoral studies, Mathakul served for seven years as a high school and middle school band director in schools on the island of O’ahu, Hawai’i. Mathakul earned a Master of Music degree in Wind Conducting from the University of New Mexico where he studied conducting with Professor Eric Rombach-Kendall and clarinet with Professor Keith Lemmons. During his time at New Mexico, Mathakul served as graduate assistant for the UNM bands, where his responsibilities included assisting and conducting the concert bands, marching band, and running the “Soundpack” basketball pep band. Mathakul also served as the music director for the Symphony Orchestra of Albuquerque, a community orchestra.