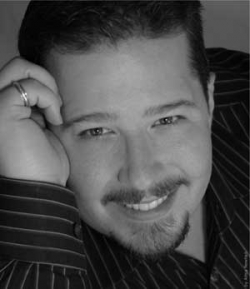 Update: Gregory's many friends, former classmates, professors, and colleagues at the School of Music were saddened to learn of his sudden death in July 2013 at age 35. Read more here.

Tenor Gregory Carroll continues to show exceptional promise as an emerging artist in the opera world, garnering several top honors and special distinctions in the past year alone.

Most recently, this up-and coming student of world-renowned soprano Jane Eaglen was awarded the sole Metropolitan Opera Career Grant for 2009. He recently returned from New York, where he coached with Ken Noda and sang for Maestro James Levine onstage at the Met during a trip initiated and funded entirely by the Metropolitan Opera.

Earlier in the summer, Carroll was a resident at the Merola Opera Program at San Francisco Opera Center, where he worked with some of the finest coaches in the world, including Kathryn Cathcart, George Darden, Martin Katz, and Eric Weimer. One of 23 singers chosen from across the world to participate in the prestigious program, he appeared at the Herbst Theatre and the San Francisco War Memorial Opera House singing Erik in Der fliegende Hollonder; scenes of Walther von Stolzing in Die Meistersinger von Nernberg; and scenes of Doctor Caius in Falstaff.

Just prior to his departure for Merola, Carroll was awarded two medals from the elite Irene Dalis Vocal Competition. Of the 100 singers granted auditions and the ten finalists who appeared in-concert, he took second place overall and was awarded the distinguished Wagner Prize.