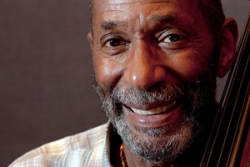 The School of Music presents a free workshop/performance by bassist Ron Carter on Friday, May 28, 1:30 p.m., in Brechemin Auditorium. Carter will be in Seattle May 27-30 for a three-day engagement at Jazz Alley with his Golden Striker Trio, which also features guitarist Russell Malone and pianist Mulgrew Miller.

As a touring musician in the early 1960s he performed throughout the United States in concert halls and nightclubs with Jaki Byard and Eric Dolphy. He later toured Europe with Cannonball Adderley and from 1963 to 1968 was a member of the classic and acclaimed Miles Davis Quintet, along with Herbie Hancock, Tony Williams, and Wayne Shorter.

Carter was among the few bassists who continued to play acoustic bass when many turned to electric bass. "It was a conscious choice," he says. "I felt a responsibility to present a viable alternative to the popular electric sound."

Carter is known for creating bass lines so harmonically and rhythmically rich that soloists must go far to respond to his challenge. As he puts it: "A good bassist determines the direction of any band." Carter often uses gonglike tones and glissandos in his work. Once his exclusive trademark, these sounds have now become part of every modern bassist's vocabulary.

Carter won a Grammy award in 1988 for the instrumental composition, Call Sheet Blues, from the film 'Round Midnight. He scored and arranged music for a number of other films including The Passion of Beatrice, directed by Bertrand Tavernier; and Haraka,directed by Ola Balugun.

Carter is the author of Building Jazz Bass Lines, a series of books on playing jazz; a Comprehensive Bass Method, for classical bass studies; Ron Carter, Bass Lines; and The Music of Ron Carter, which contains 130 of his published and recorded compositions.